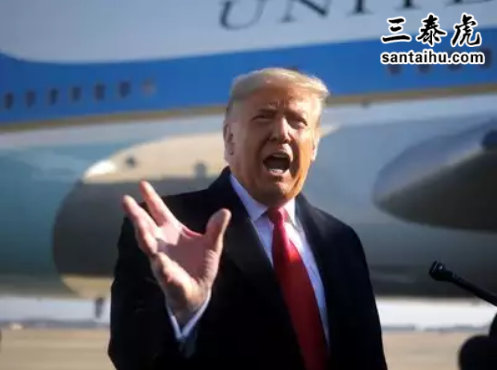 WASHINGTON: US President Donald Trump, under pressure to resign after his supporters carried out a deadly breach of the US Capitol last week, said there was tremendous anger about moves to impeach him but added he did not want violence.

"I want no violence," Trump told reporters as he left for a trip to the border wall in Alamo, Texas.

In his first remarks to reporters since December 8, the embattled Republican president did not answer a question about whether he would resign.

"This impeachment is causing tremendous anger and they're doing it, and it's really a terrible thing that they're doing," Trump said. He added that the move to impeach him, on a charge of inciting insurrection over the Capitol attack, was a continuation of the "witch hunt" against him.

On being asked whether he bears any responsibility for storming of US Capitol, Trump said his words at the time were 'totally appropriate'.

Trump would become the first US president to be impeached twice if the House of Representatives votes in favor of impeachment on Wednesday.

We should be more concerned about the rowdy behaviour of farmers along Delhi border. What happens in usa is none of our business.

People are willing to die for Trump, but Biden does not get any response and cannot draw a crowd. If America does not verify vote of the people (that one person one vote), then it will end up a third world country.. Wish America the best.

As Trump is leaving I would only say that enemies of India and enemies of Trump have similar mentality.

Trump lacks certain basic common sense else he could have easily got re elected. one thing is he didn't mince his words unlike other slimy US politicians

No POTUS would incite or want violence at Captiol. Benefit of doubt may be given to Trump by US lawmakers

Trump try to master the trick of modi to split the voters and staty in power . Unfortunately either he was not that smart in it or american voters are more smart .

Actually he is threatning of violence if he is kicked out....

Democrates are shrewd and crooked. Republican leaders are always good to India. Trump did lot many good things for his people but anti media was always doing the level best to damage his image... he could not manage the media... another thing is that he was caught at times with foul mouth... this all made image poor and unpopular amongst most.

These Democrats are shame to the US ...Mr Trump is a great nationalist leader...US needs him more and he is defeated by postal ballots fraud..otherwise Mr Trump is a clear winner

Knowing his nuisance value why are you provoking him. Just calm down for one more week.

This guy is fearless