It felt like I was on top of the world: PV Sindhu 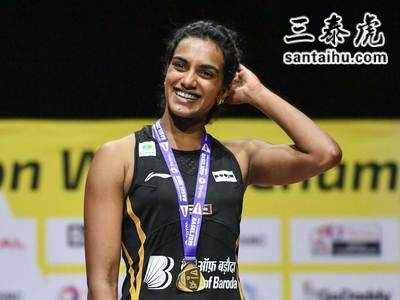 HYDERABAD: PV Sindhu is savouring the heady moment on arrival home after her World Championships triumph in Basel on Sunday. The 24-year-old Indian made short work of Japan’s Nozomi Okuhara in the final to cm her first gold in five appearances — she also has two silver and two bronze medals — and she’s been busy calling on Prime Minister Narendra Modi and sports minister Kiren Rijiju on arrival in Delhi early on Tuesday morning.

The feeling of being a world champion is yet to sink in, Sindhu told TOI in an exclusive interview before she headed home for a well-deserved celebration and rest before she turns her attention to bigger battles ahead.

You’ve been in the finals of a World Championships before. Of course, with a delightful result this time. What was your fist reaction to the win? Was there something on your mind that you wanted to do after wng?

It took me a long time to digest the fact that I have become a champion. I slept very late the night before. It was a typical pre-match night. And mind you, it was a very big match. I was thinking about the points, the matches I played going into the final. Fortunately, everything went well and just as I hoped it would. It was a wonderful feeling, the feeling of becoming the world champion, but I didn’t eat anything for a long time after the match ended.

But now that you are a world champion is there a craving to eat any of your mother’s specials?

There’s no such craving. But most importantly, I’d want to see my mom first. Meeting her would be great and after that I would eat whatever she makes for me. Right now I want to enjoy the moment with her.

Was it a case of nerves the night before the final? Did your opponent or past failures play on your mind?

Nothing of that sort. The only thought when I went to bed was that I should play well. And I was very sure in my mind that I should treat this match as any other, not let the situation or the stage get to me.

You were quite effusive in your praise for the national anthem while on the podium. It must’ve been really gratifying?

To hear the national anthem play is a great feeling, any time. I don’t know why but in Basel on Sunday, it felt like I was on top of the world when I was on the podium, watching the Indian flag go up. It’s such a wonderful feeling.

A champion, they say, is never satisfied with his exploits. Now that you’re the world champion, have you identified your next conquest?

Yes. This win will definitely give me a lot of confidence and impetus to achieve a lot more. I’ll definitely carry this confidence forward. I want to do well in the Super Series tournaments. And since this is a qualification year for the Olympic Games in Tokyo, I want to give it my best.

As world No.2 sometime ago, you were not very far from the top spot. And now that you’re on the ascendant, do you reckon the top spot will be a reality soon?

Obviously, I want to see myself as world No. 1. But I’d put it this way. Rather than think about the ranking, I’d like to focus on wng more tournaments. If I do well in tournaments, I’ll definitely get the best ranking.

You’ve experienced being coached by different people. How much and how well did Kim Ji Hyun impact your game?

I have been working with her for the last two months. Each coach’s mindset is different. We worked on some different strokes. She found some errors and we worked together on some aspects. That has really helped me.

And how about Gopichand’s contribution in the same period?

It’s been really good. The planning and execution... Everything went really well. There has been a lot of discussion on the mistakes I’m committing and how to get better. We used to play together and he used to guide me about on-court play and improving various skills.

It must’ve been tough overcoming your defeats in the finals of Olympics and two World Championships. How difficult is it for you and other sportspersons to motivate oneself when faced with such situations?

Obviously, it was a bad feeling, losing the finals. But I never lost hope and was determined to do well. There were occasions when I felt like how many times would I lose in the finals. But I kept working harder in the hope that I’d get gold one day. It was my coaches and parents who helped me to come out of this crisis. That I was able to get back and do well is thanks to the constant support of my coaches and parents.

And it would’ve called for many sacrifices too, especially in the run-up to the World Championships.

I toiled very hard to prepare myself for the Worlds. I did not change my food habits as junk food is not for me. But the only sacrifice I made was to subject my body to a lot of strain.

A sportsperson’s life can be monotonous. Train, eat, sleep and train some more. Of course, these days it involves a lot of gym sessions too. How difficult it is?

Obviously, I used to find it very difficult at times. But once I think about tournaments, it becomes easy to motivate myself to work hard in order to succeed.

Your World Championships win has raised the expectations of a nation. Coming as it did after some below-par show by shuttlers in the last nine months, you’ll have to deal with a lot more adulation. How do you plan to bnce adulation with expectations?

Actually, I never think about losing. All of us play to win but at the end of the day only one will win. Ups and downs will always be there, you can’t take it in a negative way. You always have to be positive. I’ve lost so many finals, but I took it in my stride and came back stronger. I always take things in a positive way and worked on improving my strokes and game.

Was it a good feeling, seeing the manner in which the country lauded your victory?

It’s a very happy feeling. My countrymen’s reaction made me forget all the hard work that went into wng the title. It feels great.

Can you recount your first impression on arrival in India?

I can’t express the feeling in words. It was a very grand reception. I didn’t expect so many people to be there to receive me. It feels really good to be back in the country, I’m very happy.

How was your interaction with Prime Minister Narendra Modi? What did he have to tell you apart from congratulating you?

It was a pleasure meeting him. He congratulated me and told me ‘you played very well and are inspiring a number of people. You should win more medals for the country’.

nope... actually, you are on top of the world.. you have reached the nacle of success.. just one more peak to climb.. that is Olympics gold...

For a moment we all Indians also felt like on top of world the moment you won the cup.

Yes, Sindhu is now at top of world. She should feel it as we all feel proud on her achievement.

You have finally broken the big match mental block. I think things should only get better for you from hereon. Good Luck!! God Bless!!

Because you were actually on top of the world....Continue being there, get an olympics GOLD

You ARE on the top of the world Sindhu. Praying for similar success in future.

Yes, you are om top of the world.,Congratulations!,Wish you many accolades in your career.

One of the top most athlete India has produced so far.

yes, really you are on top of the world... congrats and keep up the good works

P V Sindhu,has made our motherland famous by wining the Gold & great of you,Sister...

Whole country really proud of you as you have really set an example to other daughters of India that they can also do in this male dominant country like India.

we should not glorify these personal achievers otherwiser our children will start going over fame only. rather glorify the social workers who do something for society. this way we can make better society

many many congratulations to PV sindhu for wng the championship, and hope she will continue this form untill next year olympics.