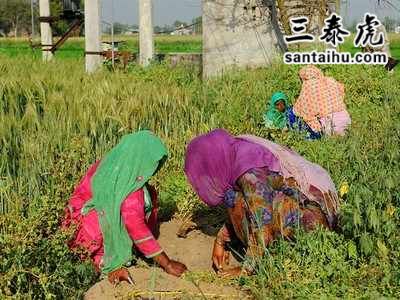 CHANDIGARH: In the wide expanse of a green field, Shabbo is busy digging up potatoes and gathering them in a sack. At the end of seven days she will get Rs 1000 for the work. Then she'll start looking for employment all over again.

Illiterate and still in her early teens, Shabbo doesn't even know how old she is. Asked about her age, she blushes and looks to her mother, Dheero, for an answer. “Mummy, k saan di haan mein? (Mom, what is my age?).” The older woman, a widow, isn't sure either. She turns to her brother Karnail Singh and together they guess that Shabbo, from Sarang Dev village in Amritsar, should be about 14.

Uneducated and dirt poor, hundreds of thousands of women labourers like Shabbo are employed in farms across Punjab. But the lush green fields that provide sustenance to a substantial population of the country hide tales of exploitation, sexual and otherwise, discussed only behind closed doors in hushed voices.

An overwhelming 92% of the rural women labourers in Punjab are Dalits and are often forced to work under exploitative conditions, according to researchers from Punjabi University, a top state varsity in Pati. According to some estimates, there are in all about 15 lakh agricultural labourers in Punjab. 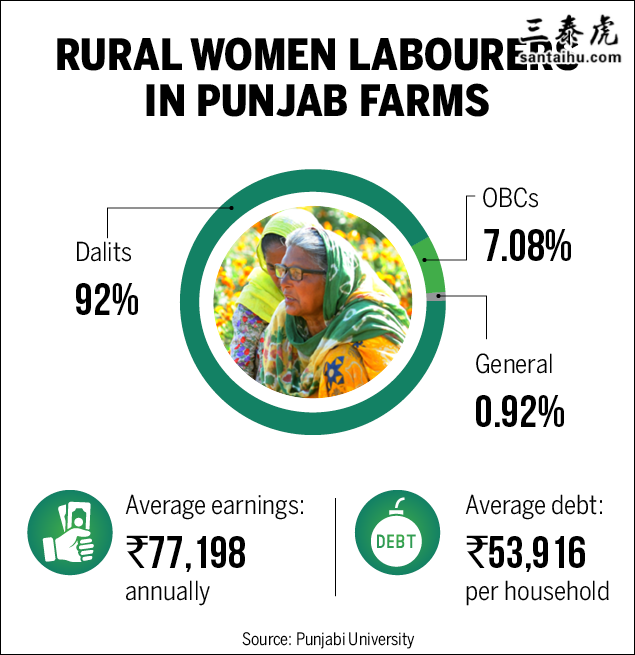 Professor Gian Singh, an expert on rural and agriculture economics, and his team collected primary data from 1,017 households across 12 districts of Punjab. Their study, released in April 2019, found that 70% of the women labourers admitted to facing sexual exploitation at some point in their lives but had kept quiet about it. Many were victims of caste discrimination.

Compounding the situation for the women is their social and financial condition. Almost all of them in de t, most are too scared to raise their voice ag inst the op ession as they fear losing precious days of wages, even if the money is often below what can be considered minimum.

“We have to face various types of exploitation and often even sexual advances. If we speak up, who will hire us?” Rajbir Kaur from Khunde Hl village in Muktsar district said.

The 30-year-old is hopeful that once wheat harvesting season is over, she and her husband, Gurpreet Singh, would get jobs to remove straw left behind in fields. This would provide them with about 20 days of employment, she quickly calculates.

According to Gian Singh, an average rural woman labourer in Punjab earns Rs 77,198 annually. The amount is too low to meet even basic needs and ends up pushing the families into a spiral of de t.

Baldev Kaur, a Dalit labourer in Lang village in Pati district, said that work on the fields is seasonal and for most part of the year they are dependent on local commission agents for loans to run their households. “Even when I work along with my husband for a few months, we are unable to clear the de ts,” she said.

Singh added that usually the amount of loan taken is not too high but local moneylenders charge very steep interest rates, making it difficult for borrowers to repay. He said that 93.71% of women labourers who were part of the study were reeling under de t and the average amount was Rs 53,916 per household. A little over 81% of the loans had been taken from non-institutional (local) lenders.

Even the pittance that the women earn comes at a heavy price.

About 90% of the study respondents were not aware that they were entitled to standard working hours and minimum wages. Over 36% of them were not paid equal wages compared with men.

“Work starts at 8am and there are no breaks until lunch. Most of us try to finish as much as possible since we are paid to complete a certain task and not on a per day basis,” said Dheero.

Gian Singh said that go nment schemes like MGNREGA have improved the situation of women labourers, but efforts need to be made to provide them dignity of labour. The study also recommended paying women wages of Rs 600 per day ag inst Rs 240 that's given now.

Dr Surinder Singh Thind, a retired professor from the department of economics at Punjabi University and a former member of the Planning Commission of India, said that no welfare schemes have been rolled out to address issues that women labourers in the rural areas of Punjab are struggling with. Thind added that prior to Gian Singh’s study there was no primary data available in this regard which has led to a delay in formulation of policies for their welfare.

Harpal Kaur from Seona village in Pati district admitted that MGNREGA has helped them -- at least in regularisation of wages. “Earlier, we were entirely at the mercy of landowners who paid us whatever they wanted. Since MGNREGA, we get paid Rs 250 a day,” she said. A male labourer gets Rs 450 for the same job.

The wage disparity does not seem to bother the women, who have internalised the gender bias. Their collective voice, the bargaining chip that gains currency during ions, is muted too. They say they ve for who their employer or village head, generally a male, tells them to.

The study by Punjabi University also found that 96% of the women respondents had cast their ves in the 2017 Punjab legislative assembly ions, but 89.3% of them did not know who the chief minister of Punjab was, 93% had no clue who the Prime Minister of the country was and 99% could not name the Presi nt.

Majority of the women labourers said that they had no interest in po itics. Punjab goes to polls on May 19 in the last phase of Lok Sabha ions. “We are constantly worried about feeding our families under growing de ts. What have po iticians done for us?” asked Paramjit Kaur, 50, from Khunde Hl.

The de ts have grown in the last decade as agriculture becomes highly mechanised, eating into the odd jobs that employed the women workforce.

Other research has also highlighted the appalling conditions of women labourers in Punjab's farms. A survey by Punjab Khet Mazdoor Union in 2018 found that most women were working alongside men to supplement the family income but not only did they face income disparity, they were also more likely to face various types of abuse.

"The humiliation and harassment is an everyday reality for many as the need to put food on the table leaves them with little choice," said Diljit Singh, a social worker in the rural belt of Fatehgarh Sahib district. "Labourers are made to work for hours at a stretch and casteist remarks from rich, upper-caste employers are common."

This report appears to be motivated. I have worked and toured punjab villages and I can say confidently that cast discrimination in Punjab is very very minimum. This story appears false.

Billionaire Mayawati is also Dalit and farm laborers tool First you need to fix definition of the Dalit. Dalit is an artificial word created few decades ago.

I should be asking Congress what you have done in last 70 years ? pls allow me to give atleast 20 years to BJP. till that time I will ve for BJP.

This is a problem all across India, not just Punjab. So what does the Economist propose as solutions? The go nment should cap private interest rates to those in line with public banks. Controlling the ever rmingly growing population, less mouths to feed, better for all.

A se chilling harrowing tale of the rich exploiting the rootless poor in the countryside. Dalit, illiterate, women --all such are additional negatives in the countryside. The real fight is between the haves (the rich) and the have-nots (the poor). Our state go nments as well as the Centre must take this matter very seriously and earnestly to implement all the esting laws to eradicate the exploitation of the poor and ensure their upliftment without losing any more time.

The article is silent about the size of the family i.e children each labour couples have. If they have more children only they have to be blamed for their utter condition of poverty. Only by implementing two children per man birth control rule, throughout India we will be in a position to remove the poverty from our country at least within 50 years. If population grow unchecked none will be in a position to save the poor including the Lord Almighty.

This is the real picture of dirt poor third world dump India!

Congress is ruling in punjab, in case you have not noticed

Pappu should feel shame on this

What did the congress do in last 70 years?? Why blame BJP for your failures. This is what happens when people live with freebies.

Why these kind of news come only before ions? Must be sponsored by International church mafia with local support from Chr tian converts.

Why can''t this issue be taken up with Modi ji? I am sure he would do something if state go nment cooperates.

If CONgress needs more time to fix what Akali and BJP has done in Punjab in 10 years, what time do you think Modi should be given to clean the mess CONgress has done in 60 years across India.

This is real state of women of poor class all over country what we talk about Me Too or Men Too of welloff people.

This is happening all over India only free education can solve it.

If law is not like UAE, these things will not be improved.

Why this timing of news? Was this not happening from so long?

Why ask timing question? It is neither BJP nor congress issue........it is real issue, and any time is good to rake it up.

OMG, when will this discrimination among people end?

Come to Ker my dear labourers. We give highest daily wage in South Asia , free insurance, free health care and govt has started building houses for migrant workers too.

IN INDIA RICH BECOMMING RICHEST AND POOR BECOMMING POORER. THIS HAS BEEN STAMPED AND PROVED BY MODI THROUGH THE ECONOMY POLICY...