Wife lay on hospital floor for 3 hours, was given no food or water: UP BJP MLA 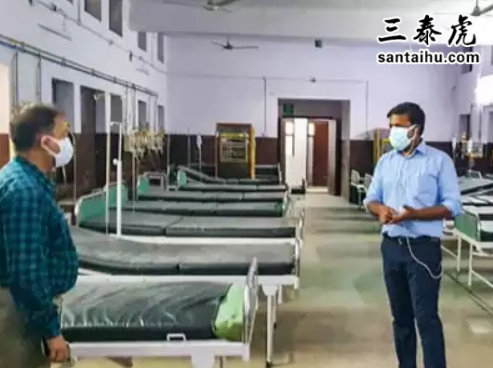 AGRA: A BJP MLA from Firozabad’s Jasrana, Ramgopal Lodhi, took to social media on Monday to express his anguish about his Covid positive wife Sandhya Lodhi’s ordeal at SN Medical College in Agra.

In a video which has gone viral on social media, the MLA said she’s not being given adequate food and water at the facility and that the family is in the dark regarding her health status. He also said that his wife was made to lie on the floor for three hours before she could be given a bed.

In a close to two-minute long video message, the MLA cmed that his wife was turned away by the hospital guards when she reached there. The MLA then contacted Agra district magistrate Prabhu N Singh, who finally got her admitted to the hospital on Friday night.

Lodhi said that although his wife eventually was admitted to the hospital in Agra, he had no update on her health in the past 24 hours. The MLA said he was not able to contact anyone at the hospital. Since he himself had just been discharged from the hospital, he was very weak and could not travel to Agra.

“What would happen to a common man when an MLA’s wife cannot be given proper care,” Lodhi asked in the video. The BJP MLA had, too, tested positive for coronavir s and had returned home after recovering from the in fection on May 7. SN Medical College principal Dr Sanjay K said the allegations made by the MLA were “unfortunate”.

“The MLA’s wife was admitted at Covid care centre at 7:30 pm. We maintain a computerized record for all patients. I personally attended to her. She was admitted in a critical condition with oxygen saturation level at 80. Following the life-saving efforts, her oxygen saturation increased to 98 without any external support on Sunday evening.”

He added: “Now, she is out of danger and has been transferred to a private hospital. The allegations made by the MLA are unfortunate. We provided the patient with the best possible treatment amid huge stress.”

Very good., May god give this to every BJP neta and their bhakts so they can feel the pain others are going through.

time will come ,all world leader will tell ,modiji is complete failed .chailw can not understand the scientist advice .modi ed pm is insult to all indian public .

ONLY GOD CAN HELP NOW

If BJP tiled state lije UP. Where no medical treatment given BJP MLA. Then one can understand situation for s common man in UP. Absolutely chaos in BJP ruled states

You're nothing more than a public servant. Public first, you later. Don't try to give importance to yourself

The CM is busy to brief the media now and then the easily availability of bed, medicines and more coveted commodity oxygen in the state whereas the ground reality is just opposite.

Too BAD, Why FENKU's MLA were given special privilege, They should suffer like a common INDIAN. .

Why should she get any better treatmen than common man. I feel sorry for her, but I feel a whole lot more sorry for regular citizens than these.

When it comes to access to health needs none should be given any special prevlegde. Mr.MLA please thank the team who could revive your wife’s health despite all the current challenges just imagine if not for your MLA tag a common man’s wife would have died on the roads

Hopefully MLAs realize they are not gods but just ed to represent and serve the people. Hopefully this is a wake up moment for MLAs.

This is story of most citizens. Does this MLA was expecting VIP treatment in this situation also

May God bring this experience to all BJP po itician

everyone sud be equal, no vvip treatment

As a Kumbh mela bhakt myself, i am blessing all BJP leaders to get covid19

If this is what a powerful po itician undergoes then look at the plight of ordinary people they have no one to compn nor express anger, only live life the way it comes