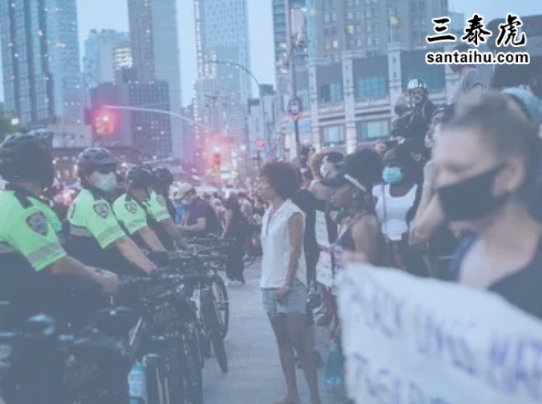 WASHINGTON: The White House went into a lock down in Washington DC, the CNN headquarters in Atlanta was vandalized, and a prester and police officer were killed in gunfire during clashes in California and Michigan respectively on Friday as the United States was roiled by civil unrest for the fourth successive day after a black man was allegedly kneed to death by a white police officer earlier in the week.

The military has been asked to standby for quick deployment in violence-stricken regions even as US Presi nt Donald Trump, rather than calm frayed tempers, threatened to unleash “vicious dogs” on prestors and appeared to invite his followers to the White House to counter demonstrators who clashed with Secret Service personnel outside.

"The professionally managed so-called “presters” at the White House had little to do with the memory of George Floyd. They were just there to cause trouble. The Secret Service handled them easily. Tonight, I understand, is MAGA NIGHT AT THE WHITE HOUSE???" Trump said in one of several incendiary tweets on Saturday morning, even as prests raged across nearly 30 US cities.

Since there was no "MAGA night" scheduled at the White House on Saturday, some commentators took the tweet as a sign that the Presi nt was inviting his militant supporters to come and counter the prestors.

The tweet was reported to Twitter by critics who said Trump is trying to use his base as his "personal vigilante army" and the message amounted to an incitement to violence. Some Trump supporters responded to the Presi nt’s tweet saying they are ready (to come to the White House).

In several earlier tweets, Trump seemed to pour gasoline on the fire with more threats ag inst prestors, while bragging about the power and the safety he enjoys behind the prective shield obtained with taxpayer money.

“Great job last night at the White House by the U.S. @SecretService. They were not only totally professional, but very cool. I was inside, watched every move, and couldn’t have felt more safe. They let the “presters” scream & rant as much as they wanted, but whenever someone...got too frisky or out of line, they would quickly come down on them, hard - didn’t know what hit them,” the U.S Presi nt said in the first of such tweets mocking the prestors.

“The front line was replaced with fresh agents, like magic. Big crowd, professionally organized, but nobody came close to breaching the fence,” he boasted, warning, “If they had they would have been greeted with the most vicious dogs, and most ominous wons, I have ever seen. That’s when people would have been really badly hurt, at least.”

Meanwhile, the white cop who is at the center of the episode that has led to the prests is now in detention, facing charges of third degree murder and manslaughter. Derek Chauvin pressed down his knee on the neck of George Lloyd for as long as eight minutes, even as the 45-year old African-American gasped “I can’t breathe.”

The criminal compnt filed ag inst him says, "The defendant had his knee on Mr Floyd's neck for eight minutes and 46 seconds in total. Two minutes and 53 seconds of this was after Mr Floyd was non-responsive.”

I think now modi ji should tweet if required than India can mediate to solve the issue ...lol

Don Trump will survive this. He is a business man mind and he knows how to handle the situation.

I have never seen such an insensible Presi nt like Trump.

America is reverting back to century old hate black policy and treat blacks as sl ves. No solution until blacks rise and fight themselves for their life and security.

Intimidation by the leftist thugs and their Peaceful cronies is not going to affect Trump. He is a different make and very soon will turn the tables on these fellows

This is the effects of years of sup ession of black and min ity communities in the US. It is sy emic racism and it’s good that people are voicing their anger.

So there is an equally bad moron at the helm of affairs everywhere.

I never really understood how a country like the US could ever make such a big mistake during their ions.

and Mr Presi nt wants to play umpire in the Indo - discussions about border row.

A country with stupid people from top to bottom !! The Presi nt has to calm tempers down..

Why not send our h an ri hts activist John Dayal to USA to help Trump to sort out this issue. ?

The police officer responsible for this has already been arrested. I dont know what are the prests for??

It is the State responsibility to resolve issues quickly as per US Federalism but the Governor was busy in not taking any strict action.

It was cold blood murder of Mr George Floyed by Police officer and neither public standing there and three other police officers did to stop.Mr Trump has nothing to do any thing with this episode and he has condemn his killing. He deserved to praised.

Police officers are mad. They also have put a nail in Trump's coffin.

Trump is all these black think they are above law and create voience in their cities rather than being proper law abiding, tax paying, good citizens.

This happened in doemocrat held Minnesota why blame Trump.