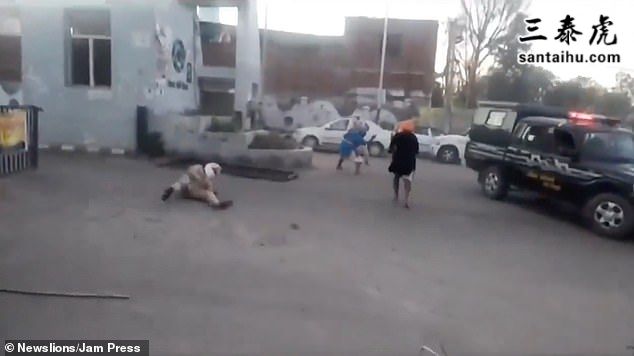 Footage has emerged of an Indian policeman's hand being lopped off in a terrifying sword attack as officers stood at a coronavirus road checkpoint.

Harjit Singh, an assistant sub inspector with the Punjab Police, was patrolling outside a vegetable market in Patiala when seven men belonging to the Nihang Sikh warrior sect turned violent.

Footage shows a truck ramming through the barricades before the warriors leap from their vehicle and attack with traditional Sikh blades.

Singh's left hand is cut from his wrist and he can be seen writhing on the floor in agony, screaming as he tries to stem the flow of blood with a handkerchief.

The assailants were arrested and brought into custody, but Singh and six fellow officers suffered injuries and were rushed to the Postgraduate Institute of Medical Education and Research in Chandigarh, according to CNN.

After more than seven hours of 'painstaking' surgery, doctors managed to reattach Singh's severed limb to his left wrist.

Captain Amarinder Singh of the Punjab Police tweeted: 'Police Party on Naka duty was attacked today in which one ASI's hand was cut off and six were injured. 'Police cornered the culprits and have taken them into custody.'

India has been put under a blanket lockdown, effectively quarantining its 1.3billion citizens.

But still the country's number of cases continues to climb, with around 10,000 cases and 339 deaths.

Some experts say India has not conducted enough tests and that the true number of infections is much higher.

When the Indian Prime Minister first imposed the lockdown there he mentioned the possibility of shooting people who broke the restrictions, when you see behaviour like this you can understand why he made such a threat.

Useless police. There were a dozen of them. They could have easily brought that man down but were just standing around doing nothing.

What is wrong with people? Why are some folk permanently angry and unable or unwilling to see that rules are being made for their benefit?

Does he have a gun? Could he not shoot?

What a horrific situation. I hope the surgeons were successful and this gentleman makes the best kind of recovery possible with such an injury.

Government and police are corrupt in India anyway.

Police going around hitting people with sticks ..to enforce lockdown.. some of them are definitely over zealous.. only this time they hit the wrong person.. or maybe their father ..so ... he retaliated. .. police have to respect civilians ..for them to respect police.

Those people are crazy and dont have the medical system we have here. Coronavirus will create an absolute catastrophe over there.

That poor policeman. No one deserves such acts of violence when going about their job. I wish him a full recovery and the accomplice a long, hard prison sentence.

Please give those poor policemen a gun.....

Lots of bad news coming out of India, go nment needs to get a grip.

Yes, but why on earth did they do it?

paul, this once great land

Very glad to hear they sewed the Policeman's hand back on... I hope he makes a complete recovery.