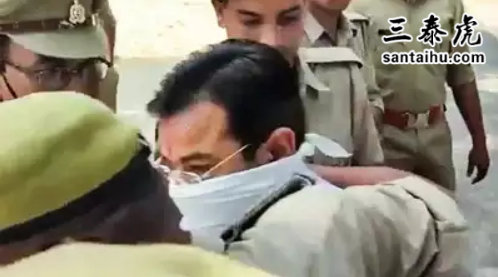 LAKHIMPUR KHERI: After nearly 12 hours of intense interrogation by the special investigation team (SIT) on the Lakhimpur Kheri violence in which he has been accused of killing four farmers, Union junior home minister Ajay Mishra Teni’s son Ashish was arrested late on Saturday night. Ashish had skipped summons by the SIT on Friday, after which a second notice had been issued asking him to appear.

"He has been arrested for not cooperating with the investigation and giving evasive answers," DIG Upendra Agarwal, who is heading the SIT, said on Saturday night.

Around 10.30am, Ashish entered the Lakhimpur Kheri crime branch office by the backdoor, escorted by over 10 cops. He was accompanied by two lawyers, Avdhesh Kumar Singh and Jitendra Singh. Ashish had been asked to appear at 11am in the second notice put up outside his house on Friday. "My client has come with video evidence to show he wasn’t there (the site of the killings) that day," his counsel Singh said in the morning. They also reportedly presented 12 affidavits of people saying Ashish was not at the Banbirpur violence site that day.

As internet services were suspended again, police from neighbouring districts had been called to Lakhimpur Kheri and SSB jawans were deployed. BJP workers from across the district converged at the office in Lakhimpur city. Security around the district jail and the collectorate was suddenly stepped up in the evening.

When asked if it was preparation for arrest, ADG (law and order) Prashant Kumar had earlier in the evening told TOI that he "didn’t know". He added, "Local police have taken their own decision to maintain law and order." A senior offi al from the administration, however, said the security was in place to prepare for both scenarios. "Whether he is arrested or not, we are ready for both. We have ensured required security to maintain law and order. The decision on his arrest rests with the SIT," the offi al told TOI.

Around 11pm, Ashish was finally arrested. Police were preparing to take him before a remand magistrate at the time of filing the report.

Kindly Google Rakesh Tikait networth... It's $11 Million. He's richer than most of the middle class Indians and he calls himself a farmer. So are the so called farmers presting - they are the rich folks who are just creating noise to bring the go nment down. The real farmers are busy working on their farms not bothered with this so called farmer agitation. Jaago India Jaago!!

BJP leaders so cruel, power-hungry and liars. BJP leaders have become more cruel and harsher than British rulers. Due to so much of corrupt money and power, they have become arrogant, and mowing down farmers from behind , sitting in their luxurious SUV cars!!

govt should show some se and arrest that tikat and that guy who killed the drivers..let law be the same for all

Ha Ha !!!! Hundreds of people saw him there and Bhartiya Jumla Party says, he was not present there.

His Dad should be immediately sacked from his position for lying about his whereabout at the time of the in dent. BJP should lead by example and not support people like him.

Good job! There should be no discrimination and law should take its course.

His father is still a minister. How? Modi needs to wake up

In our country, you like it or not, law is different for different people.

Why this murderer is given so much prection. If he is innocent and was not present while the in dent then why was he absconding till the second notice of SIT.

Internationally the image of India takes a beating when people running the country themselves try to shield their ministers who give provocative es leading to cold blooded murders. We are making a mockery of our country's judicial and police sy em. A common man gets thrown into jail even without valid charges.

In a country if the attitude of the son of a Home minister towards police and law of sdthe land is like this only God can save this country.

Feku will prove that this criminal was in foreign offi al vacation at the time of accident. He will walk scot free because all eye witnesses would somehow meet with "accidental deaths" before court hearing.

Where he is lodged,he will get 5 star hel facilities. Thanks to his dad.

Our indian prime minister has been missing and ignoring farmer’s prest.. hes kee quite because his big corporate buddies have put duct tape on his mouth.. county is raging in fire while PM ignore and acts like all is good..

no bail for him CHRAGED HIM IN TERRORIST ACT

No body above law including Feku and Taku.

Stringent action action needed to give justice to the victims

Modi Go nment completely ruined India.  its time People to react and throw this go nment into dustbin to save themselves and for their future survival.