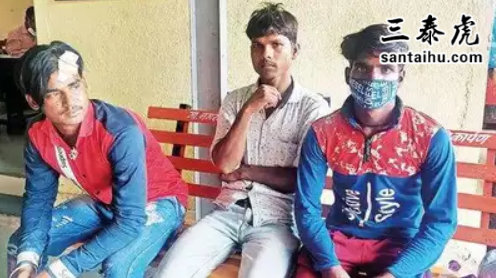 KALYAN: A 20-year-old woman travelling by an express train was sexually assaulted and over a dozen passengers were robbed by a gang of eight that boarded at Igatpuri station in Nashik on Friday evening.

Five of the gang have been arrested. The robbers forced at least 15 passengers to part with cellphones and cash after threatening them. A 21-year-old man who refused to give his phone was pushed out of the train, but as it was moving slowly, only suffered minor injuries to the head.

The horror took place on board the Lucknow-Mumbai Pushpak Express around 7pm between Igatpuri and Kasara stations as the train was headed to Mumbai. A case of gangrape has been registered after the newly-married woman from UP, who was travelling with her husband, registered a compnt, said railway police

4 of 5 train robbers held are from Igatpuri & Mumbai

As the train entered a long tunnel after Igatpuri, the robbers, taking advantage of the cover of darkness, threatened passengers in the general coach with belts and metal knuckles, forcing them to part with their belongings, said passengers. Some of them whipped out knives soon after the train had left Igatpuri station, some of the passengers told TOI.

When they targeted the young woman, her husband and another co-passenger seated close to them tried to stop the assailants but were assaulted.

Just encounter them. then only fear appears for such peoples

They should be shot and fed to the dogs. Period.

Sonnia Sena ke raaj me ye sub common ho raha he.. inhuman ppl have no fear of law .. must b severely punished

Encounter these thugs. No point in wasting time with these useless elements.

Maharashtra is ruled by goons

Must burnt them alive immediately without mercy and without delay.

Just kill them in encounter. Period.

Death penalty is the only justice to this case

They will do this again after coming out of the jail. These parasites should be killed. Society will be much better place to live in without these insects

Kill these astards..they do not let to be lived

Only Yogi Adityanath can solve these problems permanently.  2029 Yogi needs to take over from PM Modi.

Some people have no desire to work to earn money BUT loot others and harass other people. They should have no place in society.

Good work on nabbing 5 of the criminals as the rest can be easily tracked down.They should be punished swiftly and severely so that no one dares to act in the same ludicrous way.

UP, Bihar and Tamil Nadu people are full of criminals and rapists

These culprits are from Maharashtra, not from UP and Bihar.

punish the culprits later on. FIRST kill the lawyer who will come to defend them WITH COURT permission.

Please don't use my hard earned money paid in the form of tax to feed rapist amd criminals. Shoot them and their advocates and lawyers who prect them

give me one good reason why these rapists shouldn't be hanged without running trial, bail and parole and wasting time?? police have caught them, there are eye witnesses.

At least Maharashtra Police aprehended the culptits immediately not like UP Police which did not arrest the Home Minister son even adter 5 days he committed murder.