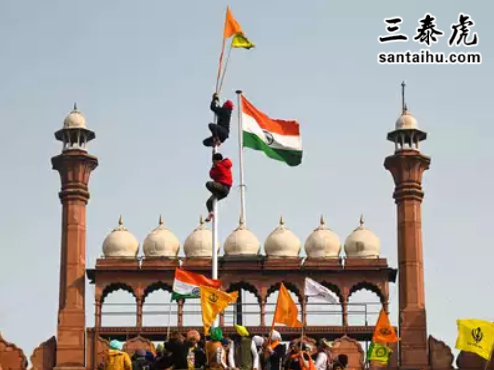 NEW DELHI: The script had been read out and the red lines drawn, but nothing went as planned when the farmers took out their tractor rally on Tuesday. A dash to the heart of Delhi on speeding tractors that rammed barricades and even threatened to mow down policemen, widespread vandalism and destruction of public property and prolonged clashes with the cops marred a two-month-long peaceful agitation on the farm laws. This was capped with the unfurling of the Sikh re gious flag, Nishan Sahib, at Red Fort even as cops were battling the presters in the foreground.

The leaders who had promised a peaceful march and should have reined in the hotheads did the disappearing act and the volunteers who were supposed to keep the rally on course were not be seen anywhere. This was a pyrrhic victory, bitter harvest of what turned out to be a rudderless agitation when it came to hitting the streets. 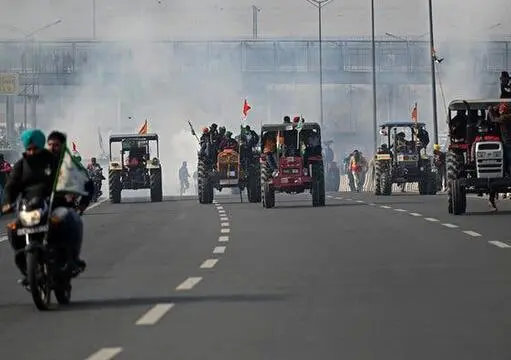 Police showed extraordinary restraint as use of force ag inst farmers was never on the table during discussions amongst the brass. However, this strategy landed over 120 cops in the hospital, half of them with severe injuries. A few are critical and in ICU. A farmer driving a tractor dangerously crashed into barricades near ITO and died on the spot.

Ignoring the schedule of 12pm to 5pm that had been agreed upon for the tractor rally, the presters at Singhu and Ghazipur borders had begun challenging the cops as early as 6.30am. They soon began making attempts to break through the barricades. This was even before the Republic Day parade had begun. By 8am, the barricades at Singhu were down and 45 minutes later, Tikri too had been breached. The tractor rally was on, still on course.

By 10am, around 6,000-7,000 tractors had entered Delhi, cocking a snook at police and violating virtually all mutually agreed terms and conditions. When this group reached Mukarba Chowk on G T Karnal Road around 10.40am, it insisted on moving towards Central Delhi, instead of going on the predesignated route. The cops tried to reason with them but the farmers, led by Nihangs on horses carrying swords and kirpans, charged at police and broke several layers of barricades between Mukarba Chowk and Sanjay Gandhi Transport Nagar. The presters were teargassed and mild force used but to no avail.

Reacting to the day's developments, police commissioner S N Shrivastava said, "The time and the routes for the tractor rally were finalised after several rounds of meetings. But the farmers drove their tractors off the routes and before the fixed time, leading to vandalism in which many police personnel were injured."

"Public property has also been dged. I appeal to the presting farmers not to indulge in violence, maintain peace and return through the designated routes," he added.

The agitators deserve the strictest punishment.

Ot is understandable if the Delhi police cannot take action ag inst the violators specially those who replaced the flag on the Red Fort. But WE THE PEOPLE OF INDIA ask you to please publish the list of those people who dared to commit such an act, we will take care of them.

They are no famers, they are hooligans and motivated po itical activists determined to cayse havoc in the capital at the behest of nefarious supporters. The go nment had bent backward to accomodate their sekfish demants and their demand to march on the Republic day giving specif routs. They abused their fre m and created the ruckus and injuries.

These thugs from Haryana and Punjab have exaggerated feelings of self-worth , they feel if they don't grow grains then India will starve.

Stupid and lawless people! y gt is tolerating so much. give them the reply in the language they understand.

Now most Indians are 100% sure that these are anti national Goons..

In the name of prests the farmers are testing the patience of delhi police and go nment , they want ugly to happen , and thats their moto, beware they are not farmers , they cannot be farmers , impossible !

no farmer will destroy his tractor if it is bought with his own money. These te rorts must be eliminated

These extremist should be punished for insulting nation's pride Tiranga.

What should police do when farmers become te rort and destroy own country property.

These are not Farmers , these are 3rd class Gunda's. In the name peaceful rally doing violence.

This is really sad day for the country. The so called farmers have shown their true colors. If these were real farmers then they would’ve taken the discussion with gt seriously. I’m ashamed that I supported these prest in the initial days.

Hundreds of crores spent in one day on diesel and other logistics by so called farmers..if our farmers have so much wealth then gt should consider binginging them into tax net !

Put in jail the leaders of the farmer rally, rioting farmers and other instigators. Give exemplary punishment for destroying public property and injuring policemen and security personnel. Jai Hind