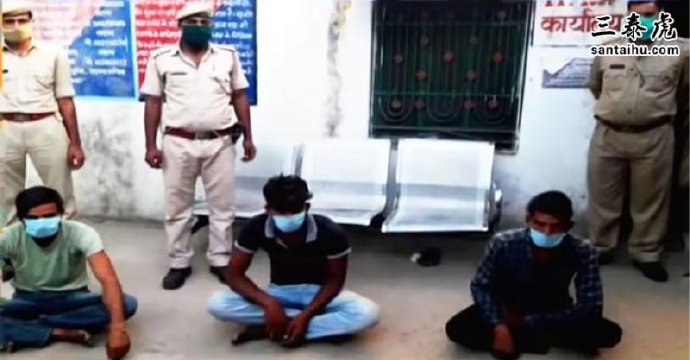 An Indian woman was allegedly gang raped in a school where she had been quarantined for a night by the police amid the nationwide coronavir s lockdown, a police offi al said on Sunday.

The in dent occurred last week in the desert state of Rajasthan when the victim, a daily wage earner, sought shelter at a police station after walking alone for miles and losing the way to her native village.

In the absence of a quarantine centre, local police housed her for the night in a school building, where she was allegedly raped by three men.

'Three local men who raped the woman inside the school on April 23 have been arrested and sent to jail,' Parth Sharma, a deputy superintendent of police in Sawai Madhopur district in Rajasthan and the investigating officer in the case, told Reuters by telephone.

The victim, aged between 40-45 years, said in a statement to the police that she had been walking for several days from Sawai Madhopur before she reached a village where she was raped.

Sharma said the woman had been sent to a local quarantine facility to get tested for COVID-19, the respiratory disease caused by the coronavir s.

'We don't know how long she was on her own for, and who she came into contact with, and her test results are not yet known,' he said, adding that a junior police offi al had been suspended for negligence.

The nationwide lockdown imposed by Prime Minister Narendra Modi last month to contain the spread of the vir s prompted tens of thousands of workers who lost their jobs in cities to walk for days in desperation to reach their homes in rural India.

Many of them are now in overcrowded quarantine centres and authorities are struggling to cope.

Experts fear that the world's biggest lockdown has not been able to reduce the spread of COVID-19, and country has begun to see a surge in cases with testing being ramped up.

Despite stringent laws, rape occurs every 20 minutes, on average, according to federal crime data.

Hope the rapists get tough punishments

Lockdown will only make life even worse for women and girls in India.

US is a Farce, Anywhere, United States

She would have been safer, if they would have put her in jail, if it was a single locked cell. What were 3 men doing in the school? She would also have been safer if she had slept on the police room floor, but they isolated her because they thought she might have covid. Ex te the useless predators who did this to her. No society needs predators in it. The police didn't even give her any pepper spray to prect herself.

This happens all the time to women in police custody. Horrendous.

The only time the men are truly put on trial is when the towns come together and demand tougher sentences or death. Otherwise men get away this the crime.

why are women not respected or prected there?

The police are the worst culprits...!!!!

Do they hate women so much to do such things?

Mistreatment of women in India has gotten worse since the Hindu go nment has come in.

What is with these men? This is what happens when men grow up with the notion that women are second class objects to be used and discarded.

What is wrong with these people? Why is this such a regular occurrence???

That poor, poor woman.. What a horrific thing to happen to her.

God bless and prect the women of India. They have the worst violence ag inst women in the world.

The statistics don't show that. There are over 600 million women in India and an extremely tiny portion of them are ever rayped or assaulted in their lifetime. Don't use these sensational news articles to make nasty snap judgments of a country with over 1.3 billion people.

Sad but India, our western wimpy feminists should go over there and help them.

Just when I was feeling like my life was hard.... man.

Enough is enough. When will someone step in to prect the women of India.

Enough is enough? Why aren't you considering the massive size of the Indian population? Far less than 1 percent of all Indian women are ever ra-ped in their lifetime. What happened to this poor lady is horrific but please don't use it to demonize India and all Indian men.

Why don't you do something?

I hope she's getting the help she needs to recover from this horrendous ordeal. Poor woman!

What is wrong with this country and its treatment of woman! Its disgusting and its about time there goverment stop ignoring what's happening and put a stop 2 it with stricter jail times etc. And the police shouldn't of left her in a school. They should of drove her home!!!!