PRAYAGRAJ: Stranded in Mumbai’s Dharavi slum due to lockdown, a Prayagraj native found a unique way to get past travel restrictions and reach his hometown — carrying a truckload of onion. He got the permit to travel as onion is an essential commodity and its shipment is not banned.

Prem Murti Pandey, 56, works at Mumbai’s Chhatrapati Shivaji Maharaj International Airport and had been stranded in the city ever since the lockdown was announced in the wake of the novel coronavir s pandemic on March 23. Pandey lives in Dharavi, touted as Asia’s biggest slum, and now a hot spot of coronavir s.

“When I noticed that Covid-19 cases were rising at an rming rate in Dharavi, it became difficult for me to stay there any longer. Hence, I decided to go back to my native town in Prayagraj,” said Pandey.

“I wouldn’t have been able to go back because of the travel restrictions. However, I realised that I would be allowed to enter the city if I was a vegetable or fruit trader,” he added.

The Union go nment has not imposed any curbs on transportation of vegetables and fruits, as they come under essential commodities category.

On April 16, Pandey went to Pimpalgaon in Nashik and purchased watermelons worth Rs 10,000. He came back and sold them in Mumbai the next day just to test waters. Setting his plan into motion, next he he bought 25.2 tonne of onion worth Rs 2.3 lakh from Nashik and hired a truck for Rs 77,500 the following day. He set out for Prayagraj with truckload of onions the same day.

"I thought, I would sell it off in Prayagraj and would get my investment of appromately 3 lakh back," he says. 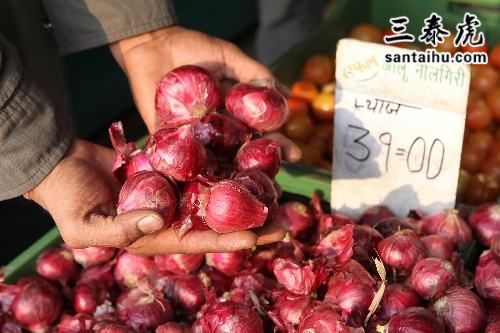 Pandey reached Prayagraj on the Thursday night and went straight to Mundera Mandi to sell the onions. However, when he failed to strike a deal for the consignment, he went back to his home in Kotwa Mubarakpur area of the city. Pandey said that he was planning to sell it to smaller traders.

Sub-inspector and in charge of TP Nagar police outpost Arvind Singh said, “When police received information that a man had arrived from Mumbai, a health department team went to his house and conducted thermal screening on Thursday. He was asked to quarantine himself at home and his swab sample was collected on Saturday. He was later shifted to a quarantine centre in Kareli on Saturday.”

Pandey is unapologetic and says he didn’t do anything wrong. “My entire family including aged parents are here, while I work in Mumbai. I have responsibilities towards my family and I believe that I chose a perfectly lawful way to return.”

If state go nments can take back their people in buses, a man who has travelled more safely should not be harrassed.

yes, but he could have, if he is so conscious , turned himself in for quarantine. if he was positive, he could have infected many in his attempt to sell onions.

Dharavi and all other slums should be nuked.

Why dont you kill youeself.

ch. Why he was living in a slum. if he can afford big transactions.

It is difficult for day laborers to find an economical place in your neighborhood. Please go and find many people there in the slums and they are hard working honest people.

If he is testes postive ,then make sure he is gonna be charged

FIR should be lodged ag inst feku for his mismanagement.

This man deserves my appreciation he put three lakhs on risk to meet his parents now many people know this idea but none will attempt it.

There are always many loop holes in any law or restrictions.

So being street smart person used his brain for logical conclusion.

he went straight to Mandi ..and possibly infected 100s more .

the man should be applauded for his novel idea

Not an example to be followed.

such people incite and invite others also to break the law.As had been cases one person was able to infect 400 people. You have a duty towards other fellow Indian not to infect others.What if he had been positive and infected his entire family

He ex ted a strategic plan!

Hope he was able to sell of his 25 tonnes of onion otherwise he will incur huge losses.

You can enter AP border crossing Telangana with whiskey bottle

These stories should shame CM of Bihar and UP. They should follow steps so that their states should give employment to natives and not just become labour generation factories.

why just UP & Bihar ? why not the whole of india and also the useless opposition !!! and btw, these migrant workers have put their sweat and blood in making Bombay, what it is !!

a genuine man, worried about his family.....going all out from Mumbai to Aurangabad, taking so many risks.....should be let off......Salute.....my friend....

Very innovative and sensible idea! Hope his truck load of onions got sold and his money recovered!

superb idea did business and got his work done. hats off to him

Afterall he reached to his intended destn...no unlawful way he followed ....ok.gud sense of moral duties bt hope he is ok

bravo.. his investment worth..

Feku should have stopped international flight in the month of february - first week but he failed.

He should have given 3 days time to workers during holi to move at own place and then lockdown but here also he failed.