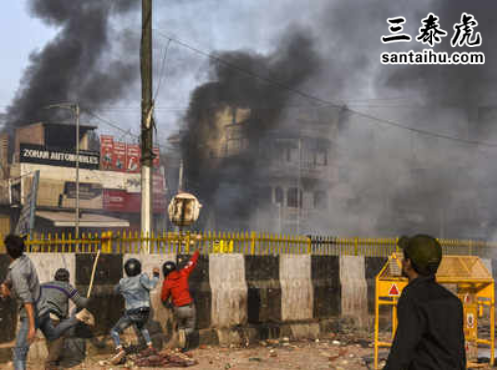 NEW DELHI: Even as five families were grieving at the loss of their loved ones in the violence in northeast Delhi on Monday, there were many injured who had been admitted to various hospitals in a critical condition. On Tuesday, some of them breathed their last, raising the death toll to 13.

Guru Teg Bahadur Hospital was swamped with relatives of the deceased. Among them were the inconsolable family members of Shahid Khan (22), who came in the line of fire while returning home along with his brother after offering prayers. While his brother managed to dodge the bullets, Khan col psed in a pool of blood after being shot. He and his wife were planning to go on vacation next month. They had got married in September last year.

“His wife is three months pregnant. Their future plans died along with him,” said Khan’s grieving elder brother, Imran.

When Khan didn’t return on the fateful day, the family members started to panic. When they heard a knock on the door, they thought he had finally reached. “But it was a stranger who showed us a picture of Shahid lying in a pool of blood in Bhajanpura. We were told that two men had taken him to GTB Hospital. We rushed there and found him dead,” Imran said. Khan was the youngest of four brothers.

Like Khan, 32-year-old Furqan was s t dead when he ventured out to buy food. Mohammad Imran, his elder brother, said that Furqan, who had a handicraft business, wanted to buy essential food items to store in the house. Mohammed said the street was relatively clear when he went outside. He had only walked a few hundred metres when a stray bullet hit him.

“I was at work when a relative called me saying that Furqan had been shot. I rushed home and we took him to the hospital. He was bleeding profusely and succumbed to his injuries,” said Mohammed.

Furqan got married in 2014 and had two children, a four-year-old girl and a two-year-old boy. Mohammed said his brother always kept his family first. “This is probably the reason why he went out. He only wanted us to be safe. Though things were tense in the area, we never expected this to happen,” he added. The autopsy was carried out at GTB Hospital.

Another victim, Rahul Solanki (26), a civil engineer by profession, was at home till 5pm. He had assured his colleagues at 4.30pm that all was well and he would meet them the next day. However, within an hour, his colleagues received a call that Solanki had been s t dead by riers. “We got to know about the riots and people from office had called him up immediately asking him to take care. He said everything was fine. An hour later, we came to know that he had been shot,” said Shweta Chauhan, a colleague.

Solanki’s father was inconsolable. He said everyone in their family was excited about his daughter’s marriage due in early April. They had been busy with the preparations for the past couple of months. “He had taken leave from work because of the tense situation in the area. Now I think it would have been better if he had gone to work. At least he would have been alive today,” added the grieving father.

People here in India are so insensible that they don’t understand the value of life. They merely become a victim of false and pseudo word of mouth spreaded by the po itical and other leaders. Shame on us as an individual that these things still prevails in our so called developed society.

Why are we falling for a trap made by po iticians...caa has nothing do with citizenship and none will be kicked out if you are indians...stop this madness and chill at home!!!...

How so many people keep guns? Are all of them licensed? Why intelligence has no clue? Is policing only meant to save po iticians, even if they are rapists, gundas!!!!

Once again common men lose their lives.I am waiting for any po itician to lose his life.

please tell me if it happens.

Where ever Modi goes death follows from gujrat to delhi

But the CM of Delhi is Kejriwal, so don't blame modi.

These are riots started by vested interest ag inst India. No Indian will be affected by CAA esp. Mus ms. How does it matter if we allow Mus ms from other countries to come here as refugees or not. The go nments both central and states must take strict action ag inst presters and those who hold wons and those who instigated them must be put behind bars.

We need to prest silently.

the master behind the seance is enjoying life

The pseudo libtrds who propagate violence needs to be blamed for these deaths.

The riot and problems in Delhi was created by Congress to welcome Donald Trump. Congress and other useless opposition parties have accepted the fact that they will never win ions to rule India

Congress can instigate anything whenever and wherever they want and sit behind and enjoy the tsha.. !! and later openly condemn it . The so called peace loving anti nationals and intruders should be hanged for killing innocent lives !! Strict action is expected from Modi gt and police and our security forces..

Left Front and Congress is responsible for all this mess. They instigated people

Violence is no solution.

In order for all Indians to be united, we need not to be selfish, we all should help each other no matter ethnicity or re gion

What a shame and then this country wants to develop. Lol. Never happening

Riers should be dealt with extreme severity. Nobody bloody man or woman has the to destroy or force others lives to a mess. Call in the Army and take all the riers to Pak border. Let them have the feel of it.

What is our prime minister and home minister doing? It seems people deaths have no meaning to them.

Modi and Amitshah are responsible for all these killings. They want this to happen so they created a situation like this.