Third case in month: Woman’s body found without head and legs in Mumbai

MUMBAI: In the third such case in a month, Ghatkopar police on Monday morning found the headless body of a woman near Naval Gate in Vidyavihar. The body, with the legs below the knees missing too, had been wrapped in a bedsheet and was spotted by passersby, who alerted the police. The woman is believed to be in her late 30s.

Police said they were scanning CCTV cameras to establish who dumped the body. According to them, the woman could have been killed at another place and the body dumped at Vidyavihar. “The most important thing is to establish her identity, which will give us the direction for a speedy probe. We are also checking the records of missing persons,” an officer said.Akhilesh Singh, zonal DCP, said, “We have sent the body of the woman, who was in a nightie, to Rajawadi Hospital for post-mortem.” Ghatkopar police have registered a case of murder and destruction of evidence against unidentified killers.

The passersby noticed blood stains on a bedsheet near a nullah on Vidyavihar Road and immediately informed police. “The autopsy report will help us to know the time of her death,” an officer said. 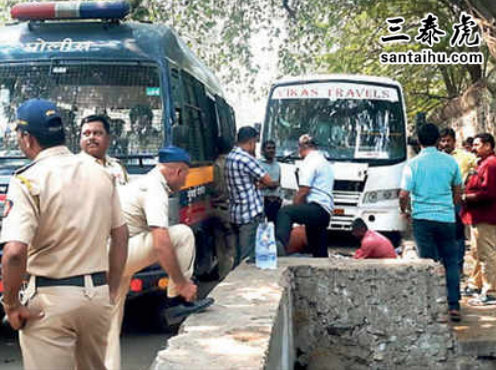 This is the third unidentified body to be found in the city this month. On December 2, a suitcase was discovered in the Arabian Sea near Mahim Dargah containing a shirt, a sweater, trousers, one hand, one leg and the genitals of a man. In a week, police the city crime branch identified the deceased as Bennett Rebello (59), a Vakola resident, and arrested his adopted daughter who turned out to be a minor. Her 16-year-old boyfriend and a 19-year-old friend were arrested with her. Rebello was reportedly killed as he disapproved of their relationship. The girl told police that Rebello would sexually assault her. Both the girl and her boyfriend have been lodged in a children’s correction home, while her friend is in Arthur Road jail.

In the second such incident, a man’s body bundled into a gunny bag was found floating in a drain in Chembur. RCF police said the corpse was in a highly decomposed condition and the limbs were trussed. After the autopsy, the man was identified as Devendra Akhade (32), an alcoholic, who would harass his family.Akhade’s Reshma Avhad alias Sonu (29) and brother-in-law Sumit Patankar (32) were arrested in the case.

Time to adopt modern technology to trace and solve the crime. there is rise in unfortunate events.

Third case of murder and with more or less same cruilty. Fortunately in previous cases the copse has been identified.

the police have to investigate the murder and bring the culprits to task. strict punishment should be given to the culprits.

What a moronic statement by police that they believe murder has been committed somewhere else and body is dumped here. What else u believe, was the killer killed her here and he mutilated here on the road while no one saw it.

Do not politicize everything. We must be vigilant. The state of impunity should be removed. A speedy and articulated investigation by police is expected. Vidyavihar is a very good residential area, someone has committed crime with a aim to disturb tranquility.

they deserve it. justice served

All this are hate crimes ,,nothing to do with marathi manus,,there is not tradition or value throughout indi which promotes this barbarism

These things were happening in Congress re gie and it's more happening in when 56 inch chested PM, I would say BJP cannot even come closer to Congress, we need somebody who can safety for the woman

Police shall find out killers with the help of expert detectives.

Indian police only act after a crime happens, they cannot stop a crime from happening. Why do we even need police force? to beat our own city?

what else we can expect from this BJP govt?

Unfortunate incident however the way how killing has happened seems to be weird hope the cops are able to crack through the case. whether all the case are linked or independent of each other

Lot of cases happen in last month same kind killing then cut in parts only few cases solves need to find out the person to stop this.