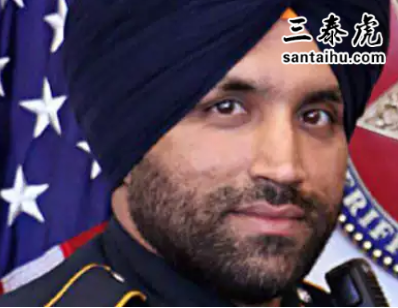 NEW DELHI: Sandeep Dhaliwal, an Indian-American Sikh police officer who grabbed news headlines when he was permitted to grow a beard and wear a turban on the job in the US, was shot on Friday during a mid-day traffic stop, authorities said. He was taken by helicopter to a hospital where he succumbed.

The 41-year-old cop, originally from Dhaliwal in Punjab’s Kapurth district, was a 10-year veteran of the Harris county sheriff’s office and became its first-ever Sikh deputy in January 6, 2015. He was gunned down while conducting a mid-day routine traffic stop in Houston, Sheriff Ed Gonzalez said. “He wore the turban, he represented his community with integrity, respect and pride and he was respected by all,” Gonzalez said at a press conference on Friday night.

According to Major Mike Lee of the sheriff’s office, “The dashboard camera video showed Dhaliwal and the suspect, Robert Solis, 47, still in his car, having a conversation with no sign of confrontation. A few seconds after Dhaliwal returned to his squad car, the suspect ran up and shot him in the head multiple times.” Solis was charged late Friday with capital murder.

A woman who heard the shot also saw Solis run to a getaway car. Lee said the suspect then went to a store nearby. After a brief search, authorities detained Solis, who has a criminal record that includes convictions for aggravated assault with a deadly won, aggravated kidnap and driving while intocated.

Too many guns in wrong people''s hands. Very sad in dent. Prayers for the family.

Why is he called an Indian even after fled from India?

Jagdish MadanVancouver BC5 hours ago

Stop this news now. Ok tell me why i should be proud for him.

The PM should also put out a tweet in condolence of the fallen Sikh.

RIP. it was racial hatred crime

Americans will remain racists forever , Trump is no friend of India

The Go nment of United States must revoke the to bear arms guaranteed in US constitution.

Displaying re gion identify in public services not good practice, why wear such headgear, beard in police military etc? humanity is above all re gious fa th, be human first which solves many issues, it's mostly the shoer mistook him as one te rort

Why a death of an police officer in duty in USA is highlighted in India as there is no angle of racial attack? Identity po itics?

Dhaliwal was a brave police officer. The culprit who killed him must be hanged.

That is why guns should not be distributed as prasad... too many guns are creating nusaince in US.

Why has the perpetrator been named ? It is always hushed up. Ohh, it was not a pi$$ful !

Officer got killed in line of duty in US. Probably because of his turban and beard, Probably, Murderer took him as a Mus m.

Suspect already has a criminal record that includes convictions for aggravated assault with a deadly won, aggravated kidnap and driving while intocated. So, it is unlikely a racial killing.

This looks like a premeditated killing. Eventhough the man pulled trigger, it seems to be it was carried out with direct instructions from someone else ( po itical ?).It should be investigated thoroughly and get to the bottom..RIP officer. My prayers are with you and Ur grieving family members..

God bless you and your family. RIP Sandeep !!

These type of Indian-American sixers must die like this .. excellent news !!!