NEW DELHI: A 51-year-old businessman paid with his life for compning about a group of youths harassing his daughter in west Delhi’s Moti Nagar area.

The victim, Dhruv Raj Tyagi, had gone to the house of one of the youths with the intention of compning about his behaviour to the youth’s parents late on Saturday night. He got into an altercation there with the youth and his father. Four people allegedly ganged up ag inst Tyagi and his son, stabbing them multiple times. Tyagi died on Monday while his son is battling critical injuries. The main accused, his father and two youths have been arrested. 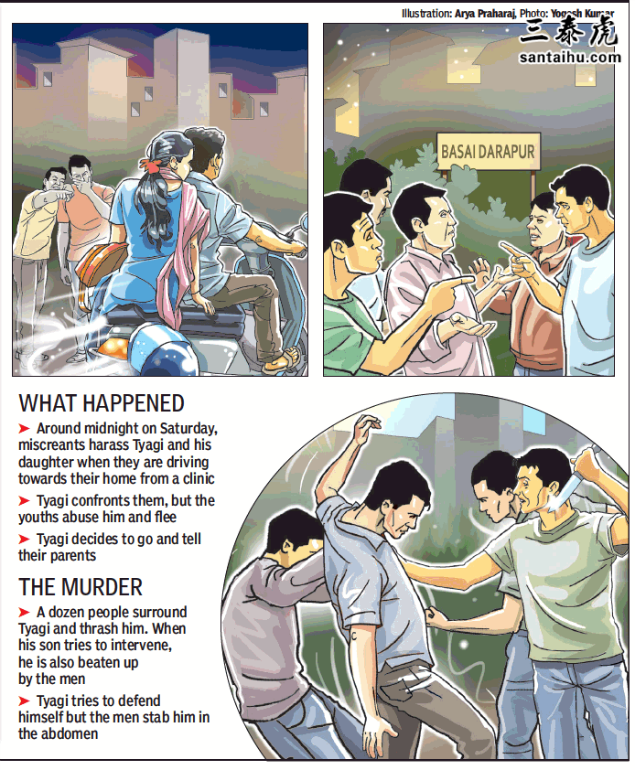 Tyagi’s ordeal began when he was returning with his 24-year-old daughter from a trip to the doctor on Saturday night. The youths passed lewd comments and made gestures at the girl. An incensed Tyagi dropped his sick daughter home and took his son with him to the house of the main culprit, Mohd Shamsher Alam, to compn to his parents.

The initial autopsy report says Tyagi had three fatal wounds in his liver, kidney and intestines. He died of heart failure due to severe bleeding. DCP (west) Monika Bhardwaj said a case under sections of attempt to murder was registered on Sunday, which would now be converted into a case of murder ag inst the accused.

According to the Tyagi family, the attack took place around midnight at the WZ block of Basai Darapur village near Moti Nagar. Tyagi had gone to the doctor to get his daughter treated for migraine. On their way back, when they were turning into a lane leading to their house, the group of youths chatting at a street corner started gesturing at his daughter.

Tyagi stopped and warned them but they continued to harass the girl. “This was not the first time the youths had misbehaved. My uncle had decided to end it once and for all by compning to their parents, ho that this would change their behaviour,” said Amit, Tyagi’s nephew. But instead of taking his child to task, Jehangir allegedly started hurling abuses at Tyagi which led to a scuffle.

During the altercation, Alam and a few others from his group entered the house and catching hold of Tyagi, they threatened to teach him a lesson and started thrashing him. Alam picked up a knife and stabbed Tyagi a few times in his abdomen.

Meanwhile, Tyagi’s son Anmol, 19, heard his father’s calls for help and rushed in. But Anmol too was stabbed on his neck and abdomen. Both Tyagi and Anmol managed to free themselves and come out of the house. Their family members and police had reached the spot by then. “It seemed to be a planned attack as the men were ready with wons,” said Amit.

Tyagi and Anmol were taken to a private hospital, where they were admitted to the ICU. Tyagi succumbed to his injuries on Monday afternoon. A police team from the Moti Nagar police station caught Alam and his father from the area. During interrogation, the men revealed the names of the two teenagers who were present during the assault. Cops have apprehended them from the locality. A probe revealed that Alam was earlier jailed in an attempt-to-murder case and was recently released. He has also been involved in minor cases of assault in the locality.

This is indeed a sad in dent.Whereas if a Hindu get killed all these liberal gangs maintain silence. Is m is a curse to humanity.

They must be given death sentence as early as possible .every culprit must be strictly punished without looking at his re gion

This is not a simple murder case. The killers were Mus ms. They were targetting a Hindu girl. Her father and brother went to their house to compn and were murdered in a frenzied act of brutality. The killers were notorious rogue elements of the locality. One of 5hem was earlier arrested in an attempt to murder case.

Dear don''t make it a re gious war, the culprits shud be hanged as they did a crime. By the way in most cases of rape the accused are always a Hindu, do u then also ask your community to save themselves from Hindu rapists???? Clean your mind of poison

Targating female and killing male family members was the modus operandi in past.

Is this a civilised society? Where is DelhiPolice Crime team? Do you want another agitation at India Gate to wake you up?????

hindus need to arm themselves now,govt and the sy em in total is toothless whether modi wins or not

Law and order in Delhi and NCR region is worse than Syria Gaza and Darfur today.

We have to end such cases of domestic te rorm on Hindus. Why is this not being looked as a case of lynching by owasi, award Wapsi losers and now that mental kl? These Arab converts are dangerous!

they jus need to be sent to pak

The same thing happened to me long back. I was a Mahatma Gandhi fan and very very very secular as my parents were all Congress lovers,,, esp my mother. BUT NEVER ANYMORE and now I''m hardcore Hindu because of this sham secularism. Even my mother has stopped loving Congress.

If it were my womenfolk, I would have butchered the entire family and happily gone to jail with my head held high.

Whenever dealing with such criminal minded people, police should be informed first.

I demand a capital punishment for criminal

Culprits should be punished without any bias.

where is law n orders and police. this was happened due to corrupt police sy em

But if any kin of a cop is killed all the criminals r lifted n hanged in thana upside down.

such rogues must be hanged. but India's justice is so slow that it itself needs lots of justice.

The murderers should be hanged immediately.