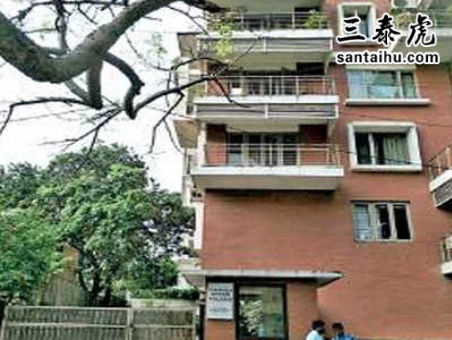 BENGALURU: A 55-year-old businessman jumped to his death from the terrace of a six-floor resi ntial complex in upscale Sadashivanagar, minutes after bludgeoning his wife to death and hurling his dog from the rooftop on Tuesday morning.

Atul Upadhya was CEO of travel agency NockNock Analytics on Nandidurg Road. His wife Mtha Upadhya, 53, was a homemaker.

According to police, Atul lived with his wife, nephew and the pet at a rented flat (No. 4) on the fourth floor of Sycon Polaris. The couple had no children. Atul's nephew was in college when the in dent took place.

Around 10.30am, security guards and housekee staff of the apartment heard a thud near the main gate, and found Atul and his Labrador dead on the ground. Sadashivanagar police were informed about the in dent. "We found Atul's wife dead in a pool of blood in the hall of their flat and a bloodstained dumbbell next to her," an officer said, adding Atul might have hit his wife on the head with a dumbbell before taking the fatal l.

"We've no clue why Atul took the extreme step, besides coming across an envelope that has nes, mostly about cancer," S Girish, DCP (central), said. Police said they didn't know until evening that Atul's nephew, studying law in a private college, was also living with them. "The boy told us his uncle and aunt were talking to each other in the hall when he left for the college around 9am," a police officer said.

Police sources said Atul's ne indicated either he or his wife was suffering from an advanced stage of cancer. "Cancer is a dangerous disease. This is better than cancer. This is not selfishness," the ne read.

An officer said, "He did not mention who - he or wife - was suffering from cancer. He didn't mention why he killed his wife and dog. We will collect the medical reports to know who was ailing."

Forensic experts collected evidence from the scene of crime. "We've preserved the carcass of the dog in hospital and will conduct its postmortem upon request," a police officer said.

"We traced the contact number of Mtha's sister in the US and informed her about the in dent. She requested us to wait for her arrival before conducting autopsy. We also informed Atul's relatives in Mumbai," a police officer said.

After cleaning the fifth and sixth floors, Murthy, a housekee staff of the apartment, said he heard a huge thud when he came down to switch on the water-sump motor and found the dog and Atul dead.

Another staffer at the building said Atul would leave his residence around 9.30am daily in his car and a fitness-conscious Mtha would visit a gym daily. He added Atul treated the dog like his child. "I have been working here for six years, and the couple ded only on the dog," he said.

According to Atul's profile on a professional networking site, he worked with Great Eastern Ship group from 1984 to 1996 in its newly formed property development division. His portfolio included Mumbai, Pune and Chennai markets.

After a four-year sabbatical, he set up G:Corp in Bengaluru in 2001 as its managing director. G:Corp undertook property development projects in Bengaluru, Pune and Chennai. Since 2006, he was involved in non-commercial activities as well as consulting. He had recently set up NockNock Analytics, which was into travel, leisure and tourism.

Who was suffering from cancer. It''s beyond doubt that india cant afford treatment for cancer even by rich mainly because of inflated costs on account of commission all over from recerral yo lab tests to medicines.

He was not sure who could take care of the pet.

We all are becoming lonely in our professional world

why did he kill the dog? Why? why?

Maybe the dog was suffering from cancer

FOR EVERY SICKNESS THERE IS SOLUTION.... BUT CERTAINLY AND SURELY NOBODY HAS GIVEN THE RIGHT TO US TO KILL OUR SELF OR TO KILL OTHERS... THIS IS DEFINETLY NOT THE SOLUTION TO THE END...

Reporter says that Businessman after killing his wife went to terrace and jumped from there.

Security only heard the sound but did not see jum.

If sum one saw,could have made an attempt to stop.

I assume Reporter has gone through CCTV footage to say that he went to terrace and then jumped from it.

Anyway, May soul rest in Peace.

Everyone knows how horrible it is to live with cancer. But taking life like this instead of fighting cancer is not a solution to overcome cancer. Recently in few in dents of cancer, I come across people how boldly they face cancer and come out completely cured. It's only with ones strong will power and belief in God one might fight cancer and overcome that deadly disease.

He did what he wants,Rip .Now people will come up with there there own version of stories ,Ha ha this is life ...

Why plan a horrific murders.

Killing is loving wife with dumbell that is not a loving husband does.

Who throws a loving pet from fifth floor..

I do not buy this cancer murder story.

why the dog. what has that innocent animal done. it could have been adopted by any person.

Very sad that even educated, well-off people are unable to face the realities & face the challenges of life! May their Souls Rest in Peace! Feel terribly sorry for the dog too!

People living in flats in apartments are the weirdest and craziest people who have ever lived in bengaLuru.

Honestly what happens in the so called treatment for Cancer is just loot and a average Indian just cant afford the scale at which he is loed.

But the truth is all the recent advances in the treatment are nowhere near in curing the patient as the foll up is never ending and a utter waste.

The mental stress of the patient and his family is a curse.

Its clear he could not take it all up

Cancer treatment is most expensive for the rich and is the most expensive disease to treat n India because of the huge costs of treatment thanks to the horrible commissions taken by the lab and doctors for referrals etc . SAD . RIP . Why did the guy have to be so brutal with his own wife and hit her with a dumbbell ????

May this sc0undrel rot in hell for killing the most lovable and friendly breed of dog..

Money can''t make your happy in life for sure.. the fate of future is unknown.. educated are the most un-educated in life today..