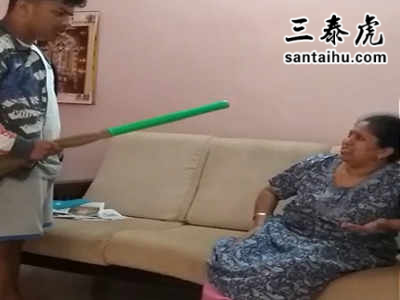 BENGALURU: JP Nagar police on Saturday registered a suo motu case ag inst a 17-year old boy after a video of him beating his mother with a broom went viral.

Confessing to his mistake, the teenager apologised to his mother before police took an undertaking from him that he would never repeat it in future. On Saturday morning, the video sparked outrage on social media. It was shot by the elder sister of the minor, who dared her by saying, “Do whatever you want; I will teach you all a lesson.”

While police let the boy off with a warning as he is a minor and there was no compnt by the mother, the punishment meted out is hardly a deterrent. Though a suo motu case was registered, stricter punishment is required to stop such young people from threatening and beating their mothers and sisters. Most domestic violence in dents go unreported as the victim and the abuser are often relatives. Clearly, there should be harsher punishments than a mere apology or an undertaking not to repeat the offence, even if the perpetrators are minors.

“The son was upset with the mother as she allegedly badmouthed him in the neighbourhood. Recently, the woman was seen talking to her neighbours on the future of her son as he was not serious about life and faring badly in studies,” said police.

The video shows the mother sitting on a sofa and the boy standing before her with a broom in his hand. He first objects to her “badmouthing him” and forces her to stop discussing about him with neighbours. Continuing his threats, the teenager beats her, saying, “If you continue talking like this, I will continue beating like this.” The woman, in her early 50s, is seen screaming in pain as the boy thrashes her.

When the sister tries to stop the boy, he asks her to keep quiet, saying he doesn’t care even if his mother lodges a police compnt. The mother requests her daughter not to intervene. The sister, however, goes on to tell him, “I know you don’t care about us, but I know what to do.”

Useless fellow son.. mother is the best thing god has given to us.. the kind of love, care n support she gives cant be measured.. you try to beat her with groom stick... idiot fellow.. police has done thing to him he should have been jailed for 2 more days to let him understand the value of mother

Instead of taking video why did not the sister took the broom herself and thrashed the boy . she should have taken this courage . useless boy needs to be taught a good lesson

After watching the video, my body boiled like anything.

Why would police left him, he should be hanged to death or killed him.

If he is my neighbor, i would have done what police not done.Idiot fellow how dare your to hit an old mother. I am cursing you, from today your life will be like very critical, once you realised then it will repent.

The son is thrashing mother. The daughter is preparing vegetables. Who established this arrangement in Indian families? It is the parents and more so the mother. The son soaks up the preferential treatment and treats other women, including his own wife later on, as cattle. He sees the same cattle walking the streets whom he ches, grabs, assaults, molests and abuses. Dear Indian parents your daughters will look after you in your old age, not your son. Even if the son does, he will make sure that ... Read More

If you spoil your child then this will happen. Never ignore early mistakes considering that avi to bacha hai.

The rascal should have been thrashed continuously till black and blue and thrown out of the house. Better not to have such kids at all.

where is his father ? stupid boy , this is the biggest sin he has done, will regret when he will understand motherhood and hardships family has endured to bring him up .

Effect of 3rd grade South movies where violence is glorified , this enters the minds of youth and this is the end result , no respect for elders , law and police

Give this S. O. B to me for 60 seconds, he will not touch anyone again in his life.