NEW DELHI: In another minute, Vijender Rana would have been home. It was past midnight and the street was clear. As he shot towards an empty space to park, his mini-truck brushed past the black labrador of some neighbours who were chatting across the street. The ruffled dog barked after him, and a few minutes later the 40-year-old father of two lay in a pool of blood. Stabbed six times with kitchen knives and a screwdriver because he refused to say sorry to Tommy, the dog. 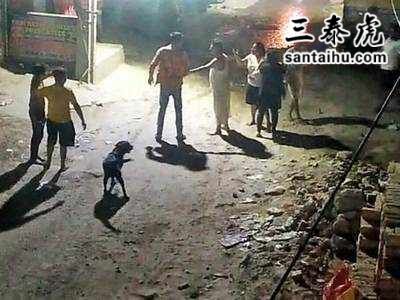 Delhi's short fuse once again led to tragedy as a family of 10 lost one earning member while the other is battling for life at Deen Dayal Upadhyay Hospital.

Vijender's elder brother Rajesh Rana (45), who ran to him after hearing his cries for help, was stabbed thrice.

The brutal stabbings happened in the Mohan Garden area of Uttam Nagar in southwest Delhi, on Saturday. Police said two brothers, Ankit and Paras, are the main suspects, and their tenant Dev Chopra is involved as well.

Ankit, Paras and Dev had gone out for a stroll with Tommy, around midnight. When Vijender drove in about 10 minutes later, Tommy was sitting on one side of the street while the three men were talking beside a scoer on the other. When Tommy started barking at Vijender's truck, the trio forced him to stop and abused him, eyewitnesses told police. They grabbed him by the hair and demanded he apologise to Tommy. Outraged, Vijender told them to mind their dog instead.

As he freed himself and hurried home, hardly 50 metres away, Ankit and Paras dragged him back to where the fight had started.

Delhi is the crime capital, it is deeply polluted and mostly occupied by the people from BIMARU states! This place is unfit to be the capital and high time we shifted to some decent place

The perpetrators of this cold murder must get minimum 10 years RI.

Tommy''s owners were many times more animalistic and barbaric than Tommy could ever be.

These guys should be hanged. Their motive is to pick up fight knowing fully well that no human will be ready to say sorry to a dog.

Human life is cher than a dog...

dog was just a tool. the real problem lies with bullism. the trio tries to bully the deceased and his brother. they did not give in hence got stabbed!!

What a horrible city!!! Not fit for normal people. Full of junk from UP Bihar etc.. Please dont come down South, but they seem to be streaming in thousands and destroying our area too.

Only solution is to raze downt he entire city, drive the UP, Bihar people back to their junk states and rebuild the city with normal people with strict entry criteria

Don''t understand how Delhi could still be the capital of the country. How do people live there ?

Murder & Rape capital of india ! This is insane

I have stayed in Delhi. Its a horrible place, everyone look for some excuse to kill someone. It should be declared mental asylum capital along with the rape capital.

What are all happening in Delhi .. ashamed to say it''s my capital

Rohan Chowdhury
If someday, Pakistan or nukes Delhi, I won''t be mad at all

These barbaric people don't deserve to live in a civic society. Jungle is where they belong.

delhi is not fit to be capital of india. it just brings shame to country regulary.