Shridhar Chillal, 82, holds the world record for the longest nails on one hand

An Indian man with the longest fingernails ever recorded has finally chopped them off - after 66 years - and now they will be displayed in a museum. 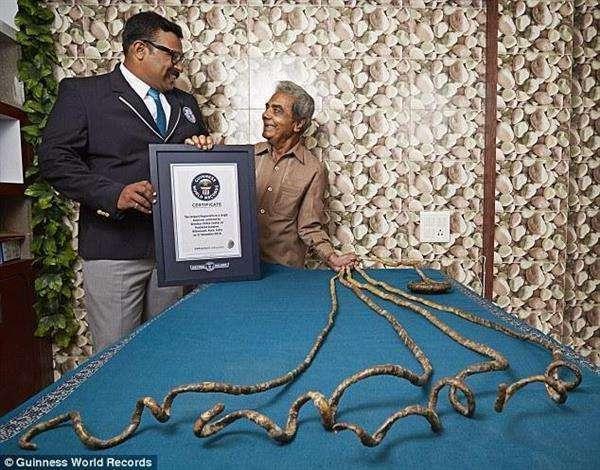 Shridhar Chillal's fingernails were nearly the same length as a bus when he finally got them trimmed after more than six decades of cultivating his huge talons.

The 82-year-old from Pune, India, had been growing his lengthy nails since he was 16 years old and holds the Guinness World Record for the longest fingernails on one hand.

Chillal was first inspired to grow out the nails on his left hand in 1952 after a teacher beat him for accidentally breaking one of his very long nails. From that day on, he vowed never to cut his own talons.

But he finally caved during a 'nail clip ceremony' in New York earlier this week and the yellowing cuttings will now be displayed in a museum.

The ceremony took place at Ripley's Believe It or Not! Museum in Times Square, where Chillal's severed claws can be viewed by the public.

When last measured Chillal's nails had a combined length of 29ft 10.1in - nearly as long as a London bus.

His longest nail was on his thumb at 77.9 in, Guinness World Records says.

In 2014 Guinness World Records crowned Chillal the person with the longest fingernails ever on a single hand.

Chillal has said that his nails were so fragile that he has to be very careful not to break them while slee.

He told Guinness World Records: 'I can't move much, so every half an hour or so I wake up and move my hand to the other side of the bed.

'When I had my nails I took special care of them because they're a very delicate part of our body, I took care of them for a lifetime. I spent 66 years of my life on my nails.

'I never have to wait in a queue.'

When Chillal first decided to grow out nails on his left hand in 1952, his teacher warned him about the level of care required and said he would never understand unless he experienced it for himself.

Due to years of growing his nails and their weight, his left hand was permanently handicapped, leaving Chillal unable to open his hand from a closed position or flex his fingers.

Despite opposition from his parents, he said he would be able to work with his other hand, eventually becoming a photographer with a customised handle to accommodate his nails when using the camera.

Although Chillal suffered years of knock backs from women and their families because of his 'dirty' nails, he did get married at the age 29 to his brother's sister-in-law.

But Chillal was also in pain and constantly left with a 'burning sensation' from the droo brown nails which dragged on the floor when he walked.

He told Guinness World Records: 'I am in pain. With every heart beat all five fingers, my wrist, elbow and shoulder are hurting a lot and at the tip of the nail there's a burning sensation always.

'I don't know whether the teacher is dead now or not but I would definitely like to say that the thing for which you scolded me, I took it as a challenge and I have completed the challenge and now, I am here.

'It was a very difficult decision for me to cut my nails, but when I realised after cutting them they'd be at Ripley's Believe it or Not, and the museum is going to maintain them … then I felt like I was making the decision, and that's when I decided to cut my nails.'

Guinness World Records said in an Instagram post: 'The end of an era. After 66 years of growth, record-breaker Shridhar Chillal from India has cut off his enormous fingernails - which will now go on display at @ripleysbelieveitornot in Times Square, New York, USA.

'They had remained uncut since 1952. Due to years of growing his nails and their weight, his left hand was permanently handicapped; he cannot open his hand from a closed position or flex his fingers.'