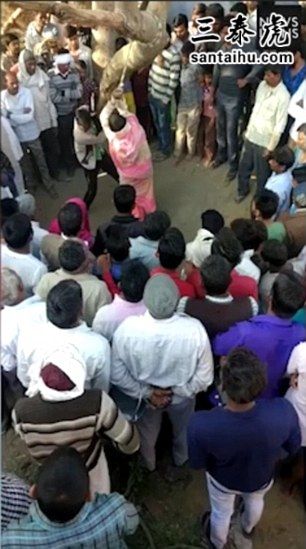 By Julian Robinson for MailOnline

This is the shocking moment a woman was flogged 100 times by her husband as punishment for adultery before collapsing in front of a mob - who then sexually assaulted her.

The terrified woman, tied by her hands to a rope hanging from a tree, can be heard screaming in pain as her husband repeatedly whipped her with a leather belt in northern India. 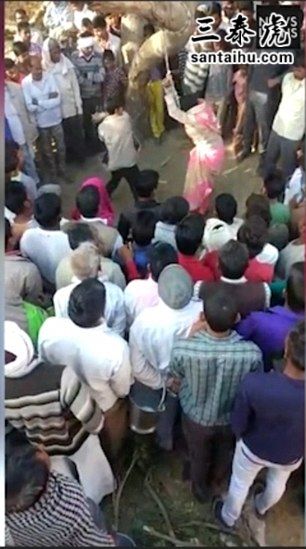 A group of men and boys standing around in a circle watched as she collapsed unconscious after the frenzied beating yesterday in Bulandshahr, Uttar Pradesh.

But her ordeal did not end there with reports claiming some of the villagers then sexually assaulted and tried to rape her. When she regained her senses, they warned her against telling the police before running off.

The savage punishment was carried out after a kangaroo court found her guilty of eloping with her boyfriend. 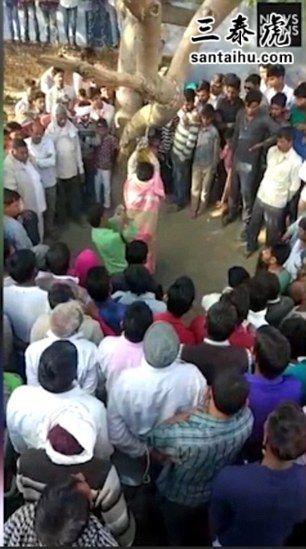 According to Bulandshahr police, the woman had run off with her lover in the first week of March and was staying with him at a relative's house.

On March 10, her husband sent a people to convince her to return home - telling her they will forget the past and start their life afresh.

But when she returned, a court of village elders was set up to decide a punishment - that she should be flogged 100 times by her husband.