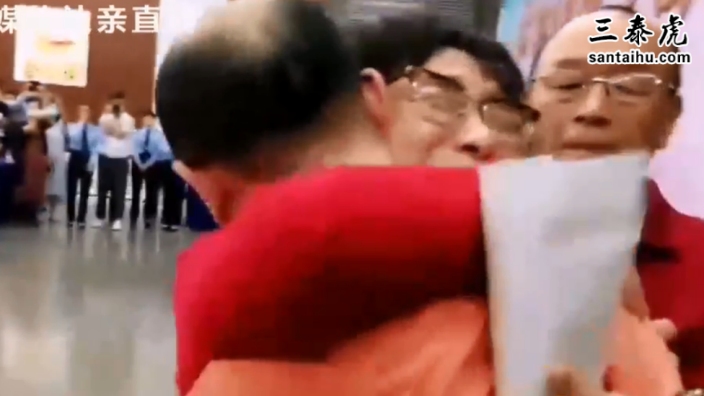 A Chinese couple whose son was abducted in a hotel in 1988 have been reunited with him after 32 years.

Mao Yin was snatched aged two, while his father stopped to get him some water on the way home from nursery.

His parents searched the country for him and his mother distributed more than 100,000 flyers.

The family were reunited at a police news conference on Monday, and the son - now aged 34 - said he planned to spend time with his parents.

"I would like to thank the tens of thousands of people who helped us," said Li Jingzhi, the boy's mother.

What happened to Mao Yin?

He was born on 23 February, 1986. In an interview with the South China Morning Post in January - before he was found - his mother called him a "very clever, cute, and healthy" baby.

On 17 October 1988, his father, Mao Zhenjing, was bringing him home from nursery in the city of Xian in Shaanxi province.

The boy asked for a drink of water, so they stopped in the entrance of a hotel. As the father cooled down some hot water, he looked away briefly, and the boy was taken.

The family searched in and around Xian, putting up posters. At one point, they thought they had found him, but it was a false dawn.

Mrs Li quit her job to search for her son - handing out some 100,000 flyers in more than 10 provinces and municipalities - without success.

Over the years she appeared on numerous Chinese television shows to appeal for help, including The X Factor. She followed 300 leads, the SCMP said, but no match was found.

In 2007, Mrs Li started volunteering with a group called "Baby Come Back Home", to help other parents look for their missing children.

According to state media, she helped reunite 29 children with their families, while her own son was still missing. She intends to keep working with the group.

How was Mao Yin found?

In April, state media said, police received a tip about a man from Sichuan Province in south-west China - about 1,000km (620 miles) from Xian - who had adopted a baby years earlier.

Police found the adoptee, now a 34-year-old man, and a DNA test was carried out to see if he was related to Mao Zhenjing and Li Jingzhi. It came back positive.

Mao Yin - who had been renamed Gu Ningning - now runs a home decoration business. He said he was "not sure" about the future, but would spend time with his parents.

Mrs Li was told the good news on 10 May - Mother's Day in China. "This is the best gift I have ever got," she said.

The investigation into the 1988 disappearance is still ongoing. The authorities have not released information about the couple who raised Mao Yin.

So glad they finally found their son after decades of searching.

Wow that is amazing, the odds of that happening in country with 1.4billion people is astronomical.

Nice to read this news.Glad that they are reunited.

I can't imagine the pain and suffering the couple had endured over the years particularly the father who must have been tormented for losing the son on his watch.

Hope the people who abducted him and bought him are brought to justice. But I also hope he was raised in a loving environment.

I’m glad he was reunited with he’s biological parents

The law should punish people who buy babies and death penalty for kidnapping or human trafficking.

I didn't even finished reading, I cry. God bless all involved for searching and the parrent.

Wow, so happy for them! Praise God they didn't give up

Hope all parents, including US parents, whose babies got missing, will have a happy ending like this.

Congratulations to your beautiful family. How exciting to learn about this on Mother’s Day. Thank you, for helping other families whose children were taken.

One out of 1,4 Billions and they found him? Wow, just wow.

With so many females in China being given up for adoption why can't those childless couples adopt those children? It's odd that a society doesn't value girls.

That’s like finding a needle in a haystack. Over 1.4 billion people.

They should punish the couple who raised the baby even though they didn't do harm to him. This is to deter people from buying traffic babies.

So handing out flyers really works.