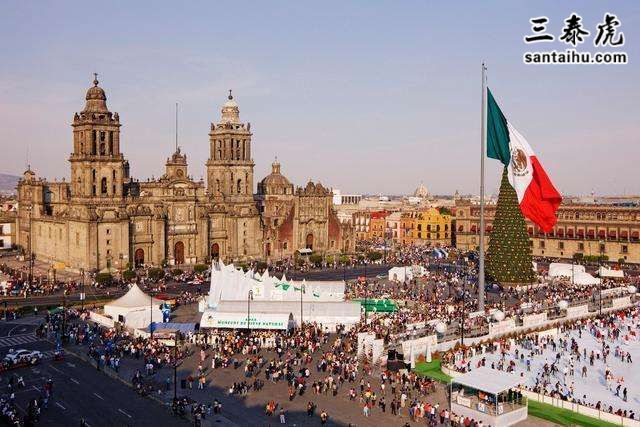 A state of development. China From importer to inventor and export it.

Nothing is wrong with them.. you ask the wrong question.. the right question is.. What the hell is China doing so amazingly well?

I dont know about mexico, i am Brazilian. In Brazil was made the worst investiments in education, utilities and market promotions than ever. Taxes, poor return and badly management of taxpayers money.

May be the right question is what went right with China, a co-st country with a controlled economy.

Not really a problem with Mexico and Brazil, which approximately maintained or even increased their level of prosperity. It was China, instead, that grew enormously, at a historically unprecedented level for several dozens of years.

Funny you assumed Mexico and Brazil fell behind. You didn’t imagine that China simply zoomed ahead? Like they are doing to the US with Trump’s silly trade war

It’s easy. Because they are too far to heaven, and to close to American. The only efficient thing they can supply to the world(actually, American is the world to them in the last 20+ years), are drugs. In other area, they can not fight with the American industrys, what else can they do?

Brazil has faltered recently because of political shenanigans, but it was considered a high flyer too in the 2000s. Mexico has actually been a fairly steady grower since the 90s. The answer is really that China was able to achieve substantial growth because it started out so poor. China's problem now is that it has exhausted all the easy avenues of growth.

In Mexico they are not allowed to build bycicles, air conditions neither motocycles trucks cars and the junk that Americans want why? Because back in the 1950 s or there abouts the American companies said we can build them for Mexico cheper that Mexico can manufacture them and I believe Mexico signed an agreement I believe for a hundred years that they )Mexico) will not develop their industry I say that because at that time I was in the 5th grade in Mexico and it was a big push by the teacher telling us to use our brain and develop and or invent the Mexican industry but when Mexico I believe made the agreement the teachers quit pushing us to develop the country, because we are at the wilm of USA the Mexican industry might take another 50 years or so to develop it (somebody out there might have a copy of newspspers to thst effect I like to hear them, thanks) I think. I do not know anout Brazil i heard they developed their own computer and programs also I heard that they developef their own car sorry that they did not developed the Brazilian industry to the American level.

It is not so much what went wrong with Brazil and Mexico as is about what China did right.

The Chinese leadership wanted to make things better for their people.

They study successful countries to see how the got there.

They invested in infrastructure and education for the long term. They wrote laws that attracted investment and laws that favored Chinese enterprises.

Then they executed a plan designed to generate export revenue, reward manufacturing with good profits, and raise the standard of living for their people.

The executed the American game plan to perfection to become the second biggest economy in the world on their way to number 1.

Because GDP per capita is a terrible measure of national strength and development.

GDP itself is only a rough impression of the nation’s strength and heavily skewed for smaller countries. For example, industries such as tourism, finance, real estate adds little to the nation’s long term strength, but all of them accounts to a large portion of the GDP in most countries.

This is, of course, not even taking into the account of China aggressively devaluing its currency in the 1980s, thus drastically lowering its GDP per capita.

The truth is, Brazil and Mexico was never in the league of China since the PRC was found. By 1970s, China has been able to manufacturing pretty much anything under the sun with a coherent and stable internal political system. While Brazil and Mexico certainly has good looking numbers, their internal development simply isn’t up to par to compete with first rate nations

Andres Garcia, I have lived and studied in several American countries

I will talk only about Mexico, because its is the case I know better. But first, a clarification. What you mention didn’t happen only when comparing with China: for several decades, GDP per capita growth has been also slower in Mexico than in most Latin American countries, as you can check in the table at the bottom. The same difference is repeated in other areas, like minimal wage and reduction of poverty. You can find exact figures in the document quoted toward the end of this answer.

Regarding Mexico, in my opinion the main answer for your question has only one word: NAFTA. Until the eighties Mexico was the Latin American titan, diplomatically and economically. It had a nascent but solid manufacturing sector, and at that time many people believed that Mexico was going to be the first “developed” Latin American country. It even had a cultural influence on the rest of the region that it doesn’t have now (it is still important culturally, but its current influence cannot be compared with the influence it had before, which is also helped by Mexico’s current tendency to look more toward the North than toward the South). The Treaty of Tlatelolco (1967), that forbids the development and placement of nuclear weapons in Latin America, can still be seen as the main legacy of the golden age of Mexican diplomacy to world affairs, because it showed the way to other later treaties in inhabited areas of the world that guarantee that today half of the Earth is in a nuclear-weapon free zone.

But in the eighties there was a debt crisis in Latin America, which affected Mexico badly. For the region, it is still the worst economic event since the Great Depression, and that crisis is also the main reason why so many Latin Americans don’t trust international economic institutions. By the 1970s, at the same time that the economies of Europe and the U.S. were suffering thanks to the increase in oil prices, the Latin American countries were growing at more than 6%. So, the main origin of the crisis was extremely bad advice in the seventies, and a couple of arm-twistings to make Latin American countries request credits to Western commercial banks, most of them from the U.S., at a time when those banks had liquidity, thanks mostly to the petrodollars deposited there by the OPEP countries, but few customers were requesting large loans. So, even now, you can see protests in Latin American cities each time a “world” institution suggests something (even when arguably many things have changed and they are not the same institutions that believed in “one size fits all” solutions, when developing-nations’ ministers with a PhD in economics had to follow the “advice” of IMF bureaucrats and World Bank interns.) In fact, it is even difficult to get articles in English that at least assign some responsibility to the U.S. banks on the creation of the Latin American debt crisis, and to the IMF on the social problems that the crisis brought, but they are very common in the Spanish speaking world.

Given the difficulties it was facing, and despite its traditional lack of trust in its Northern neighbor, Mexico decided to listen to the U.S. go nment siren song. If Mexico signed a free-trade deal with the U.S., they said, it would get a rocket on its back, because a free-trade deal would put the three North American economies in equal conditions. Given this, NAFTA would help Mexico to restore its economic growth to the rate it had before the crisis, and Mexico would soon become a developed nation.

In 1993, Mexico signed NAFTA. Obviously, everything that was promised didn’t happen. Unable to compete with foreign industries without real technological transference, and without ways to defend its economy against the power of the dollar (U.S. companies and investors only needed to ask for credits in their own currency to buy assets in Mexico,) Mexico lost in practice its manufacturing sector and the real conditions of its workers fell to the bottom, because labor laws and unions were affected. Right now, the number of factories in Mexico is huge, but most are not Mexican beyond the appearance: they are mostly owned by U.S. corporations and foreign investors. For most economical purposes of U.S. corporations, though not politically, after NAFTA they could treat Mexico in practice as the 51st U.S. state.

This means that U.S. corporations could use 120 million of Mexicans as cheap workforce, without the need to apply the same labor laws that they needed to follow in the remaining fifty states or pay the same salaries, while the U.S. go nment could disregard the social problems derived from that system in Mexico. The boom of the maquiladoras after NAFTA, where workers work up to 75 hours per week earning the equivalent to 8 dollars per day, created large benefits for the U.S. corporations using them, even when most of the products of those factories were counted as Mexican exports. Given this, hundreds of the largest U.S. companies had a huge increase in productivity in the nineties, which contributed to a new economic boom in the U.S., but it was not U.S. based, and therefore became another factor, though not the main one, for the huge increase of economic inequality in the U.S. during the last 40 years.