Why don't we build a bridge from the US to China?

Michael Feely, Architecture : I practice it.

Problem 1: Your assumption about the cost and survivability of a 5,000 mile long bridge across the entire pacific is wildly optimistic. To put it in context, Donald Trump’s border wall with Mexico is estimated to cost $21 billion. And that's for an object 25% the length, that can be built on solid ground, that doesn't need a 10 lane highway on top, and that need not fear hurricane damage. Using other mega-bridge projects as a model we get costs between 25 and 100 times greater than the $20 billion estimate you have (Call it $500billion to $2 trillion. And count on $2 trillion being closer to correct)

Problem 2: A bridge implies a single start point and an end point. Presumably Shanghai to Long Beach or so. But what happens to cargo from Hong Komg to San Francisco. Does it have to go up the coast, to the bridge, and then up the coast again?

Problem 3: To the extent that this bridge gets used, it basically is a target for half the people in the Pacific with an economic grudge. Security is going to be a headache.

Problem 4: Why just the US and China. Why doesn't Japan get an off-ramp? How about South Korea?

Problem 5: Now for the kicker. Average freight costs per ton-mile run about 15 cents for trucking, 5 cents for railroads- and about 3 cents for trans-oceanic container ships. Assuming you have a railroad on this bridge and a modest toll to pay for the original construction cost of the bridge, it would likely run about 6 cents per ton-mile to ship on. So there will be no payback, because there are already cheaper modes of transportation available. In theory, it will attract some cargo away from ships because it will be faster - container ships run around 37–46 km/h, whereas you could probably double that speed with rail freight on this giant bridge. But that’s about it for potential users.

The answer is essentially down to a few core reasons.

It cost a lot more than $4 million/mile for one thing. You would have to get tonnes of machinery, material and personnel thousands of kilometers into the open ocean. If we based this theoretical bridge on the Danyang-Kunshan Grand Bridge, it would cost at least $415 billion dollars and that’s mainly an overland viaduct. Basing it on the Dubai Floating Bridge would net us a cost of 2.125 trillion dollars. And this is not including the cost of maintenance.

And not to mention that this bridge would have to withstand any extreme weather events and be tall enough to avoid ships crashing into it.

But let’s just say for the sake of argument, this bridge was complete and is 5,000 miles from end to end. How will people get across? By road? Going at 100 mph, it would take 50 hours of non-stop driving to get from one end to another. And that would necessitate having a lot of amenities for drivers. Rest stops, gas stations, emergency services and perhaps even hotels. That would only add to the initial cost of construction and the cost of maintenance, but now you have a large labour cost as well. If someone is going to work in the literal middle of nowhere that’s a day’s drive from anywhere else, you bet they’d want to be paid and housed decently.

How about high speed rail? The Chūō Shinkansen can travel at speeds of up to 315 mph and would take about 16.5 hours give or take station dwell times, the time needed to accelerate to top speed, the sections it can run at top speed at, etc. Then we would also have to factor in the cost of laying 5,000 miles of railway track and of electrifying rail and ensuring it stays electrified. And we would need to build brand new stations, staff them and finding out a way to keep a 5000 mile rail line in operation.

And that’s not getting to the cost of environmental impact studies, land acquisition, public hearings, route planning, designing, planning and the thousand other tiny things that happens before the first foundation is laid, not to mention the political backlash and the uncertainty of even funding this before a committee can even get started properly studying this route.

TL;DR : It’s a lot less expensive and complicated to flight transpacific than to build a transpacific bridge.

Well, why don’t we make a few considerations before answering?

1.What is the distance between the US and China? Currently the longest bridge is the Danyang–Kunshan Grand Bridge at 102.4 miles. China and the US are more than 5,000 miles apart.

2.How much would it cost? I’ll bet that the Danyang–Kunshan Grand Bridge was not inexpensive, now imagine more than 50 times MORE expensive?

3.How would the bridge be constructed? (I heard the Pacific is kind of deep, those piers would be tall)(I also heard that Pacific Typhoons are pretty powerful and destructive.)

Those are just the initial considerations.

There have been proposals to bridge the Bering Strait and connect North America with Asia, but the economics just aren’t there. Just the bridge itself would be a stupendous engineering feat (never mind crossing the Pacific by bridge). Then there’s the fact that to connect the destinations worth going to (the Pacific coasts of the USA and China) you would need ten thousand kilometers of road and/or rail traversing the barren wildernesses of northern Canada, Alaska and Siberia. Terrain that is heavily mountainous, in large parts permafrost, and terribly inhospitable in the winter. It would make the trans-Siberian railroad look like a short pleasure jaunt by comparison.

Reportedly China is considering it already, primarily for train travel, with a combination of bridges and undersea tunnels. However it would likely be more expensive than traveling by plane and take several days to make the trip even using their fastest railways. It would cross at the Bering Strait to minimize undersea tunneling. It would however be the US’s first genuine modern high speed train servuce. 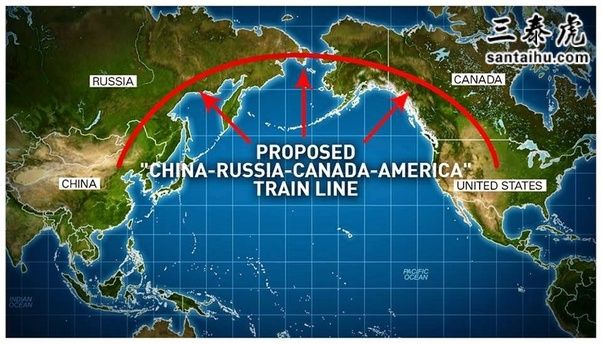 It it possible to build a railway or highway starting in Beijing, going north through Russia, over the Bering strait, down through Alaska and Canada and ending in Seattle.

But it make no economic sense.

The reason is that the endpoints are so far away from each other that not many passengers or goods will travel all the way. There are of course longer railways in the world that make sense, but they have many cities along the line. Those cities may benefit a lot, but it is hard to find places with imminent and huge development potential in Alaska or North eastern Russia.

For such a big project to make sense, there has to live a sizeable population along the line who can benefit from it. North eastern Russia and Alaska are very sparsely populated, and the endpoints can be much better served by ships and airplanes.

Loring Chien, proud to be a US citizen

You also have the problem with ocean traffic - you have to have crossings for the bridge at lots of points.

Anchoring bridges in thousands of feet of water and over thousands of miles in length with untold need for overpasses to allow ocean going traffic (fre m of Navigation and all that) makes for a impossibly expensive and probably insoluble engineering undertaking that we can never make economically practical.

Well, for one thing, if you were going to build ANY bridge between Asia and North America, you would do it where it was closest, like Alaska and Siberia.

Second, if you built a bridge, then the entire world is screwed if there is an apocalypse.

I think there is actually a plan come up with by China in 2014 that build a high speed railway crossing Bering Strait. But US hasn’t replied yet.

John Lloyd, Retired USPS, live in the forest in the Cascade Mountains

Your assumption is way below actual cost, and even then would be for a crossing of shallow water. Using ships is way more efficient.

you can consider building one in future…but as of now its impossible.

Because it would be the most BORING drive