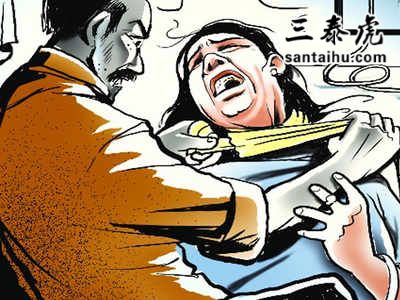 GORAKHPUR: A 24-year-old man strangled his wife to death after she allegedly refused to have sexual intercourse with him and later cut his own private parts in Siddharthnagar district on Saturday morning. The man is undergoing treatment at Baba Raghav Das Medical College, Gorakhpur.

A case was registered ag inst the accused, Anwarul Hasan, resi nt of Kakra Pokhar village, under Pathra police station in Siddharthnagar district, after his wife's father filed a compnt ag inst him.

Hasan, who works in Surat, had married Mehnaz (21) over an year ago and had come home just two days ago.

As per reports, the couple was alone at home when Anwarul attacked Mehnaz. The neighbours informed police when they peeked through an open window on hearing noise and saw Mehnaz lying on the floor and Hasan in a pool of blood. Police rushed Hasan to the district hospital where doctors referred him to BRD medical college.

The body of Mehnaz was sent for autopsy.

Talking to reporters at hospital, Hasan said, "I got very angry when my wife refused to entertain my request for sex. I strangulated her to death and then cut my own private parts."

Siddharthnagar SP, Dharamveer Singh said, "Mehnaz's father has alleged in his compnt that his daughter was being harassed by the accused for dowry.

Hindus don''t involved in any crimes and they never any wrongdoing because they are all saints.

This is what nehru, gandhi has imposed on us!

It is not the matter of Hinduism or Is m. If any woman refuses husband''s wish, he (regardless of any re gion) will definitely provoke.

Only sex plays in their minds?

No wife is allowed to refuse sex.... However, instead of killing, he could have divorced or performed second marriage

Wow. You think a wife can''t refuse her husband sex? You think this Incident is justified ? Wtf is wrong with you people

Wife will refuse sex when something wrong. These people never care for woman.

I think it's other way around, she chopped his tool first then in revenge he killed her

It is nothing to do with any re gion..We find mentally sick people around us in every street..Sex education is the need of the hour.

Anger managemnt should be taught at schools as half of murders are done in fit of rage.

If he chopped his cutlet first, he did not have to kill his wife.

Please do not look at it through the lens of re gion. I think you come across different manifestation of sexual assaults in every re gion. We are simply wasting time in bringing re gious angle to the whole episode

Very sad. Why so much anger in people. They can''t think about the results of their actions.

Hindus do more crime than Mus ms. See the stastics. They do murder of their own relatives for dowry for alcohol for property.

They put their old parents in shelter homes.

It's inhumane and preposterous. Regardless of relegions, this act is remorseful

Uptil killing wife was fine, but the second part was a bit too much.

Killing is sin.How can you think?

All comments are in favour of woman. Just imagine the man came from Surat just for two days after more than a year. And her wife denied sex. So who is at fault.? Surely she might be having some extrrital relationship.

When women doesn''t like sex men should keep quiet if women want more sex then they goto Court saying my husband can''t satisfy me, what a blunder everything is up to thier liking.

He should have married with 4 wives.

India is a nation of 130 crores worth population. So crimes like these will happen here and there almost every day. Pls don''t bring re gion into these unfortunate in dents.

Friends, please do not bring re gion in this. It is either lack of sex education or a dowry case.