Sometimes in life, one only has oneself to blame - for instance if one decides to place something sensitive between the cers of a live crab.

R Rao, 37, suffered the swift justice of foolishness after he played around with a live crab in order to show off in front of his friends in Tamil Nadu, southern India. 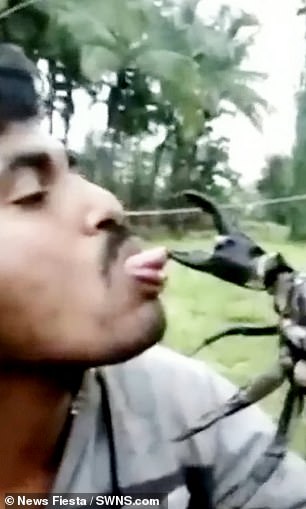 Video footage shows him holding the large crab in his hands while sticking his tongue out to lick its open claw.

Mr Rao had reportedly purchased the live crab at a nearby market, and decided to joke around with the animal before turning it into dinner.

Surrounded by an unknown number of friends, he poses with the crab, holding it up in front of his face.

When the creature seem disinterested, he keeps provoking it by wiggling his tongue in its open claw.

Unsurprisingly, the crab then clamps down on Mr Rao's tongue with all its might. 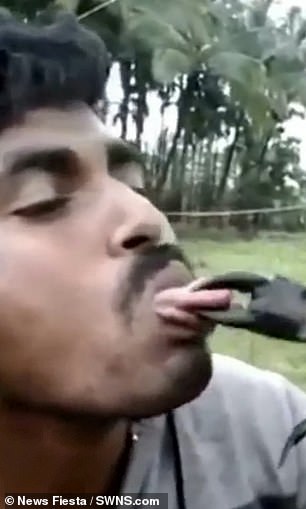 Mr Rao can be seen grimacing in pain as the creature refuses to release its tight grip.

One of his friends can be seen trying to release the clutch of the animal from the tongue by force, while trying not to hurt the tongue already gripped by the crab.

Eventually the crab's claw is prised open, and Mr Rao's friends can be hear laughing at him.

How stupid can you be?

Seen these clips many times on YouTube lad. You¿re not funny, just stupid like the rest of them. I just hope the crab managed to disinfect it¿s claw for when it needs to use that to eat!