LONDON: Hundreds of South Asian highly skilled migrants held a prest outside the UK Parliament on Wednesday, cming they are victims of the next Windrushscandal. The reference was to a po itical scandal over the immigration status of the Windrush generation — British African Caribbean people resi nt in the UK. 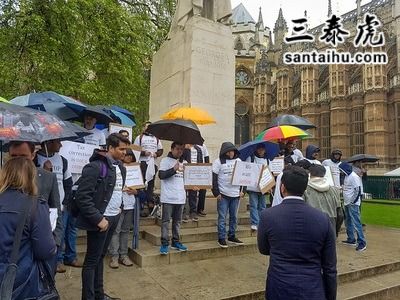 The 400-strong mix of professionals, ranging from IT consultants to mental health nurses, mainly Indians and Pakistanis, were presting ag inst long delays in decisions on their applications for indefinite leave to remain (ILR) in the UK as well having their applications turned down under Section 322 (5) of the UK immigration rules which branded them as “threats to national security” because of mistakes on their tax returns.

Twenty-three thousand people have signed a petition, organised by the presters, addressed to UK home secretary Sajid Javid, UK Prime Minister Theresa May and Leader of the Opposition Jeremy Corbyn, calling for an end to the “hostile environment” for immigrants.

In the pouring rain, some with babies in rainproof-covered pushchairs, they said they did not want to return to their home countries as they had stayed in the UK such a long time they were more familiar with the way of life and jobs market here. They also said the grounds for refusal was “deftion of character” and would prevent them getting a visa to travel to any country in the future.

Carrying a placard saying “Tax correction is not a crime”, a man chanted “This is….” and the crowd replied “Windrush II”, followed by “What do we want?” “Justice.”

“I think it’s the same as the Windrush scandal”, said Hari Babu, 31, from Kochi, Ker.

Babu lost his job as a global recruitment manager at menswear fashion brand Thomas k after his ILR was refused last year on the grounds that he had not declared the correct amount of income on a previous tax return when he had run his own recruitment consultancy. “They said I had underdeclared my income to avoid paying tax,” he said. And for that, he was refused under the clause Section 322 (5), which is normally used for criminals and te rorts. “I feel like this country has failed me. I was a higher rate taxpayer, I took zero benefits. I have never even been to hospital. They are exploiting a loophole to meet deportation targets. Windrush is just the tip of the iceberg. There are huge issues going on with the home office,” he said.

None of the presters TOI spoke to had fa th that the newly appointed home secretary, Pakistani-origin Sajid Javid, would change things.

“I hope that Sajid understands our pain as he was also an immigrant, but then he is part of Theresa May’s go nment so I don’t have that much hope,” Babu said.

“It is similar to Windrush as we have also been here a long time and are doing everything . Just because of one small technical error on our tax returns the home office cannot say we are a threat to national security. None of us are threats,” said Ashish Bjigari, 31, from Hyderabad.