Since we couldn’t tell ‘Uni’ where we were and neither could we ask anyone to tell us about our location, it took him a little time to locate us but at last we saw him briskly walking towards us like our son would. He immediately got down to the business at hand after a brief exchange of pleasantries. We walked to the Booking Counters for getting us the card tickets for the booking had been done on line. Possession of a standard ticket is necessary for entering in the railway stations in China as there’s a bar code printed on the ticket which is read by the scanner and the entry is through automated ports.

After doing that, we went and reserved our tickets for the last coach returning to Gaogang on 23rd February, the day we had booked our return from Xiamen. The train’s scheduled arrival time at Nanjing was 1610 Hrs. and considering the reliability of the Chinese trains schedules, we could have booked to travel back to Gaogang on a coach leaving earlier, but we preferred not to take a chance, after all we are wired to Indian system of living but surprisingly so far I haven’t found night coach services anywhere here. From most of the bus stations that I have seen, the last coach leaves around 6:30~ 7:00 PM. Here in Gaogang like in all other small and medium sized towns and cities in China, the local bus service stops around six in the evening which also is a dinner time in China. In spite of adopting many western values and life style features, e.g. wearing of minimum essential clothes by the women, they have remained tradition bound largely, including in matters of interaction between opposite sexes, mourning the dead, warding off evil by bursting crackers, consulting fortune tellers for auspicious time for doing things etc.

The hotel that we had got booked for us after much deliberations with Sunny wasn’t an ideal choice. We had reposed much faith in value of money aspect of “Jiangjin inn” chain of hotels since we had tried them in Shanghai where they offered us great discounts and we found the very reasonably priced and located at prime locations close to the Railway Stations and bus stands. But here in Nanjing although the hotel was just about 500 metres away from the Railway station, the place was desolate and they didn’t even have taxi on call facility for the convenience of the customers.

They didn’t give us the room they had promised, citing non-availability as the reason and so we ended up paying high price for a room at a place where we had no choice but to walk up to the station, dragging our bags along and besides there was no market or eatery nearby and the prospects of going hungry loomed large over our thoughts.

After checking in and resting for a while we started off with Unicorn for seeing some of Nanjing. Thick fog had set in. Long columns of street lights illuminated the shrouds of fog engulfing them. The boulevard looked like a fascinating pathway in the dreamland. Nanjing station rose like a sphinx with all its grandeur sprawled over floating mass of mist, spellbinding us. Unicorn speaks excellent English. A silhouette of a strange ghoulish creature could be seen from a distance. Unicorn tells me that it is called Pixiu. It is one of the nine sons of the dragon. It stands for good fortune and is also the chosen logo of China communication bank. 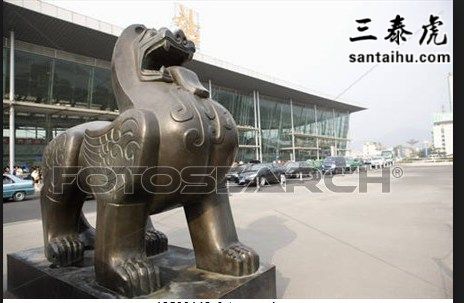 Hmmm… So, it signifies good luck. Perhaps my calling it ghoulish would be an anomaly like calling lord Ganesha an elephant. (Ganesha- Indian elephant God, one of the most revered and worshipped images of God forms in India, the skeptics deride and the believers pray for mercy on them for their lack of faith).

Uni took us to the area where Temple of Confucius is located. Since it was the spring festival time, the area was teeming with people. Huge Lanterns brightly lit the place and their glitter reflecting in the river water really made it spectacular. Like everywhere else in the world, the place was encroached upon by knick-knack sellers, enticing prospective buyers and onlookers. There was a hefty entry ticket for entering the temple, but it seemed to be more of interest to the serious students of philosophy as there were hardly any people inside and it being late time in the evening the temple looked like a cavern, with flickering flames of history keeping it from getting lost in the darkness of time as it be the manifestation of truth of the present times.

It’s a sad reality of modern times that today’s child will like to spend much of his time on Facebook, discussing what should he do on his first date with a mate he/she found through internet than what Confucius said about how life should be led. I learned that Chinese see him as God incarnate, but most of the Chinese don’t believe in God. Communism shattered all beliefs and banned all religious practices but did the God die? There is an element of God in you and me that differentiates us from the non-living. That element of God guides me at every instant of decision making, as to what I should do and what I should not. I am in constant communication with Him all the time, long as I live. There is no death for Him but only my body that is his temple and when the element of Him gets the command to leave the mortal me, it quits and what is left behind is good for nothing except being consigned to the flames for rapid transformation to dust from where it arose.

During the spread of Islam in Hindustan, the non- believers were termed as Kafirs and it was considered just to kill them. Islam sanctions it. In every religion except Jainism and Buddhism, killing an animal is among the sanctioned practices to please the Gods, so! What when the one who doesn’t believe in your God is seen as an animal? What was cannibalism? And what was sl very? Killing a sl ve wasn’t a crime. Who started this game of death? Perhaps, the God lord Himself.

God, says that to re-establish reign of righteousness and to punish the evil, I reincarnate. The world is teeming with people suffering from Jerusalem Syndrome, the people who see themselves as God incarnate, who take it upon them to set things right. In India there are innumerable preachers, having millions of followers who take every word spoken by the Gurus as gospel truth. They are ready to die and even to kill if their God incarnate Guru tells them to do that.

Like you a lot many Chinese believe in religion, though they don't know it by a name. I see it in their day to day life. This good conduct, the right moralistic existence and discharging of your duties sincerely is what religion is all about as KB Sir has very well explained. You can read a lot of commentaries on Gita and yet may not understand it because Gita is about adopting religion as a way of life. I will send you the simple translated version of the Gita KB sir has spoken about. Gita has been translated in to Chinese by an eminent scholar and ISKCON follower. I am going out, will search for the link and send it to you, I have it stored it somewhere.

I saved this page and after I finish reading the Gita I look back here. :)

By the way, as a Chinese person without any religion(but I believe in god-although I dont know what form he is, I believe he exists in all kindness and goodness and love and other virtues; this is my own understanding about god), the Gita is difficult to understand for me, but luckily an knowledgeable nice Indian dada is always there helping me with it.

Once I was in China for a week, was staying in a hotel. One of my friend called me up one day and told that, "Before eating anything, make sure that none of the item in plate is moving". Your description of food reminded me of my China days, hardly a week but was really horrible as long as food was concerned. I survived on bread, salad and rice.

I have posted a reply to your comment many time Anneshwa but I don't know why it doesn't get through. I can understand the plight of the vegetarians when even the so called non-vegetarians will also chicken out at the sight of the chinese food Haha. It indeed is hard. If you are living here, you still can get enough of fruits and vegetables to survive on but if you are on a short trip- it can be nightmarish.

Navneetji, excellent pictures, particuarly the ones taken at night !

Thanks Prasad Ji for your visit and a comment.

Very educative. China is a place of contrasts much like Goa. A tourist place but transport grinds to a halt after 8PM! Frustrating.

Thanks for the magical whirlwind tour and your philosophy.

How you make yourself understood in China is a miracle...

Hello Edwin- In Goa still you can hope to find a vehicle but here in China, at least in small towns it is very difficult. In big cities ofcourse there is no problem but even in Shanghai Metro service stops at 2130.

Navneet, thanks once again.

I have not had time now but fully intend to spend more time with the religious aspect part of this blog. I expect their is much I may glean from it, and thank you for providing it. I educate myself in this fashion and find this particularly helpful.

Where does my religion teach about peaceful co-existence I often wonder. All out mythological stories are based on revenge and on the victory of Good over Evil- but what is good, accepted universally? I don't think ISIL considers slaying non-muslims evil. During the reign of Mughals in India, one ruthless and staunch muslim ruler Aurangzeb used to behead, ten thousand Hindus everyday, it is said. I am sure, he didn't ever think that he was sinning.

Great pics and narration.You are turning spiritual i see. and on whats app u are naughty!!! HAHA

u are very comfortable in China i see. it seems clean and nice. pretty expensive these days, said my brother ?True ?

I could take a walk with you on the Chinese streets :) Loved this blog. I have not read your last few blogs on this subject. But every one is independent and I could make sense of it :)

Thanks Sindhuja- I try to keep them quite independent though the narrative is continuous. I am conscious of the attention span of the reader although I fail to make them short but I know, if the reader will have to go back and forth, he/she will much rather skip to read them- No one has such a spare time and we shouldn't expect it from the readers. Thanks for liking this one.

Nanvneet before having the soup did you confirm that it didn't have dog, snake or lizard blood? I think it is safer to eat what passes for Chinese food in India than Chinese food in China.

Hahaha Balaji, You better don't ask in China, if you want to survive. Over the time, I have developed taste for their food. Indian, Chinese- well that has nothing to do with the Chinese food but yes, that is indeed very tasty. I am sure most of the Indians will throw up even if their selves around to eating all the yucky stuff, I now call delicious.